Jimmy Rollins - on legacy and leading off

Jimmy Rollins is a legacy player for the Philadelphia Phillies. In a game where few stars play at a premium position such as shortstop and play it as well as he has, Rollins has had a great thirteen seasons. Baseball-reference.com has given him a total of 41.8 WAR for his career. Fangraphs.com has given him 44.8 WAR. So both agree that Rollins has been a terrific player in his career. My one problem with his legacy really is not his fault. Some 78.4% of his career plate appearances have come as a lead-off batter. This season, when Ben Revere got off to a slow start, Jimmy Rollins was again put on top of the lineup and has now been there for the last fifteen games. Rollins is not a good lead-off batter.

"But wait, William," you say, "he has scored over a hundred runs on six different occasions including last season." Yes, I hear you. He has also stolen over thirty bases ten times, four of those times over forty and had over thirty steals last year. I get it. But that still does not mean he is a lead-off batter. Let me explain. You might even think he has been a better lead-off batter than Derek Jeter (who has really only batted lead-off for about half his career. Look at the following War Graph from Fangraphs and remember that most of Jeter's value comes from his offense whereas at least a third or more of Rollins' value comes from defense: 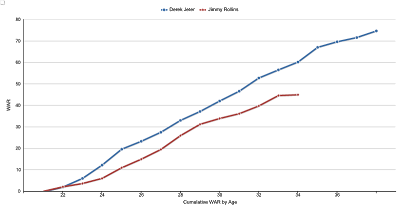 Jeter has clearly been the better offensive player. 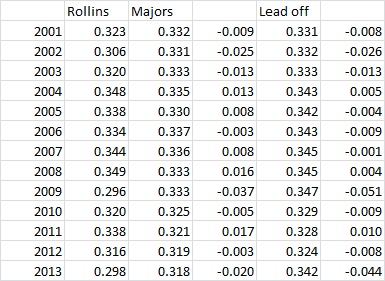 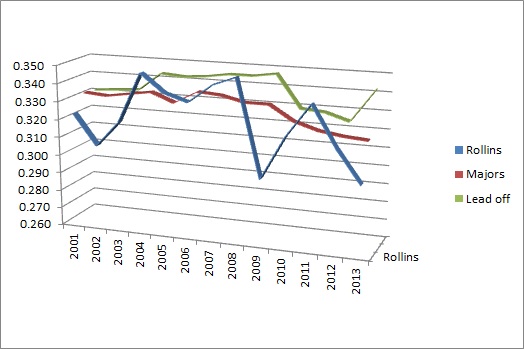 Again, do not get me wrong here. Jimmy Rollins has been worth every penny he has made from the Philadelphia Phillies. When his bat was not great, he glove was. He has earned his legacy place in Phillies history. If he plays six or seven more seasons, he will come close to 3,000 hits. All I am saying here is that he is not the best suited for lead-off. His on-base percentage has often not been high enough. And the one thing you want from the first guy in your lineup is to get on base.

Posted by William J. Tasker at 1:37 PM No comments:

The month of May has not been kind to this old game picker. For every brilliant pick like A.J. Burnett shutting down the Nationals, there is the Mets beating the Braves because all-world closer, Craig Kimbrel could not save a game. And who would ever expect that the Red Sox, Yankees and Orioles would all be shut out?

The weather has really been frustrating too. The Royals were washed out again and they were the Game of the Day and they could have been the tie breaker for the day too. Ah well. That is the way it goes.

I hate short schedule days. A few games go wrong and you cannot make them up with a larger schedule. In this case, nearly everything went wrong. And all of the wrong picks featured the visiting team winning the game. How often does that happen? Heck, even the Game of the Day pick was wrong for the first time in a very long time.

Oh well. I am not going to dwell on it. It is a beautiful sunny day and it is supposed to be like that all weekend and the golf course opened last night for the season. It is all good. With that kind of attitude, and with a hop, skip and a jump, here are Friday's picks:

A couple of lousy relief efforts by the Brewers (What is wrong with you, John Axford?) and Rays turned what would have been a slightly positive day into a slightly negative one. Both of those teams mentioned above gave up huge leads late in the game and it was incredible. For the Chicago, it was a good day with a mild upset as the White Sox beat the Rangers in Arlington and then Scott Feldman beat a former Cubs' pitcher for his second straight good outing. Both of those games were wrong. But Chicago fans are happy, so that is something at least.

I also did not expect Cliff Lee to give up eleven base runners in six innings and for Trevor Bauer to get away with giving up six walks in his five innings of work. And the Indians are suddenly a hot team that has approached the .500 mark. I am still not used to a Phillies team that is sort of pathetic offensively.

So the first day of May caused a bit of a mayday. And Thursday brings a dreaded short day where a couple of mistakes can ruin the entire day. Thursday's picks:

After hitting 42 homers in 2012 and finishing April with nine more, it is pretty apparent that Edwin Encarnacion has arrived as an elite power hitter in Major League Baseball. And Mr. Encarnacion does not hit little cheap shots either. He crushes baseballs. He hit two in last night's game that were just crushed. But I noticed something unique in his home run trot. While he was circling the bases, he puts his right arm in a stationary position. I am not sure how how Major League pitchers feel about his trot, but they sure look fun.

Here is what I am talking about. Here is one of the homers. Watch him as he rounds second and heads to third. Gosh, that ball was crushed!

Here is the other one and he does it again on the second homer. I could not embed these so you have the link instead.

Have you ever seen anyone do that before? I have not. I am sure that someone has asked Edwin about the move, but until I find it, all I can do is speculate about what he is doing. Here are my guesses:
Do you have any more ideas? Or maybe you have read an article about it. Whatever Encarnacion is doing, it is kind of cool and different. One thing is also sure: Edwin Encarnacion has become one hitter I would gladly pay to see hit again and again.

Update** My good friend, Navin, who knows all things Toronto sports says (in the comment section) the move is called, "The Edwing." I could not find a Google reference, but if Navin says it, it is gold to me.

Happy May Day! The month of April is in the books and it was a good month here. And it also ended well with a 10-5 day. The month ended up with a 58% success rate, which is slightly above normal around here. That may sound rather ordinary. But try it some time to see how difficult this can be.

I was surprised by the Blue Jays' win over Boston as a combination of good hitting against Jon Lester, terrible defense by Jarrod Saltalamaccia, and power by Edwin Encarnacion overcame a couple of deficits to put the Blue Jays on top.

Picking Seattle to win was sort of stupid. The Indians jumping all over Roy Halladay was a surprise, and I should have picked Oakland over the Angels. But there were good picks too. The Royals over the Rays was a good one as was the Marlins over the Mets. Overall, it was a good night of picking.

So here comes May! Wednesday's picks:

There were too many upsets last night. That is often a fun thing for baseball and proves the old point about any given night. But it is not good for a game picker. I did get one upset pick correct with the Mariners over the Orioles. But the Astros creamed the Yankees. Ubaldo Jimenez pitched a good game, which is an upset in itself. The Mets blew a save and then lost in extra innings to the Marlins, ruining another good Matt Harvey outing. The Braves came back on Stephen Strasburg and won the game despite Julio Teheran giving up eleven base runners in five and a third innings. It did not help the Nationals' cause to have two runners picked off in the game.

So it was not a good night. The week is still largely in the plus side thanks to Sunday and at least the Game of the Day came in correctly. But it was definitely a night to bounce back from. Here are Tuesday's picks:

From Giancarlo Stanton's two homers to bring in the Miami pick to Clay Kershaw pitching nothing but zeroes to the Indians and Royals' double-header going exactly as predicted, Sunday got off the week off to a flying start here in Game Picks land. Twelve correct picks to four incorrect is a heck of a way to start the week. It certainly beats the 3-13 debacle that started last week.

The Yankees only recorded four hits against R.A. Dickey. But two of those hits were homers by the motley crew to account for the three runs it needed to beat Dickey. Hisashi Iwakuma shut down the Angels as predicted to give the Mariners two straight wins. Yes, it was a good day (with apologies if your team lost).

There are twelve games on the Monday schedule. The picks:

The week's comeback is complete. After a disastrous 15-27 start to the week, the picks then went 36-19 the rest of the week to finish in the black after a 10-5 day yesterday.

The day had trouble getting started as the Tigers beat the Braves again. I guess it is official that Kris Medlen has regressed to the mean. The Orioles beat the A's again as A.J. Griffin lost for the first time in his career at home. And the Twins took care of Derek Holland and the Rangers which was a surprise. I did not get the Marlins win I had expected, but Giancarlo Stanton hit his first homer of the year and boy was it a bomb.

There are sixteen games on the schedule today as the Indians and Royals make up a game as part of a double-header. Sunday is easily the best baseball day of the week. Here are the picks: