I bounced off of a Jeff Sullivan post over at Fangraphs.com to write about the surprisingly good starting pitching depth the Yankees had last year from swing starters. If one or two of those swing men are needed for the rotation full time, that depth is diminished greatly. See the post at It's About the Money.
Posted by William J. Tasker at 1:38 PM No comments: 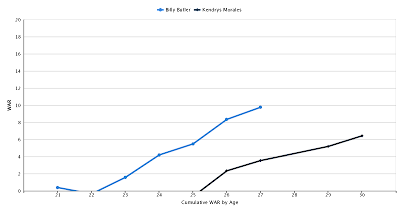 Billy Butler is a fan favorite in Kansas City, is signed for the next two years for just about what he is worth and does not cost a draft pick to keep. His performance should bounce back a bit from 2013 and he should have two or three more productive seasons. I do not see Kendrys Morales as an upgrade, especially if he costs a draft pick. If the team was willing to sacrifice a draft pick for a free agent, it should be on a pitcher.
Posted by William J. Tasker at 11:17 AM No comments:

The remarkable career of Yuniesky Betancourt

The baseball world has been filled with stories about remarkable baseball players whose careers may or may not be rewarded with a nod to the Baseball Hall of Fame. Baseball writers who have a vote in such proceedings are filling columns on how remarkable they thought each career was. Those of us without a vote are doing the same and making fun or tearing our shirts asunder over the former. At least sixteen of the players on the HOF ballot had remarkable careers. But sometimes, a career can be remarkable for other reasons. Sometimes, a career can be remarkable because it exists at all. Yuniesky Betancourt is such a player. And not only is it remarkable that Betancourt has enjoyed nine seasons in the Major Leagues but according to MLBTradeRumors.com, that career will remarkably continue.

The theory behind the WAR statistic is that it measures the relative wins a player is above replacement. It is obvious to many that the two major statistic sites measure the statistic differently. But the theory is the same. The idea for general managers and baseball minds around the country is that a player will be above or better than replacement. The replacement part of that wording means your average minor league player that could come up and do the job instead.

Once that number is obtained, the general manager can then attempt to price a player accordingly based on how much a "win" is valued in the market. The cost of a "win" has been going up dramatically. What was worth $3.7 million just a couple of seasons ago, the "win" is now valued at $5 million and rising. With the cost rising, you better sign a player that will be worth that kind of money.

Based on that kind of money and going by today's valuation for "wins," you would expect Betancourt to have a career WAR of around 3.1. If only that was the case. B-R gives Betancourt's career rWAR as -2.5. Fangraphs.com is more generous and values his career at -0.7 fWAR. According to Fangraphs, this remarkable career has cost his teams a total of $6.8 million. In other words, Betancourt's career valuation is -$6.8 million.

And yet, it keeps on going. MLB Trade Rumor's headline reads: "Yuniesky Betancourt Drawing Interest." Why exactly? The story goes on to say that several teams are interested in him. That is remarkable.

It is even more remarkable in that Betancourt is no longer a shortstop. One could half blink in this day and age in the dearth of shortstop talent in baseball to understand why a terrible shortstop would have at least a little value in this market. But Betancourt has not played shortstop since 2011. He has played five games at that position in total in 2012 and 2013.

Okay, at least Betancourt played 46 games at second base in 2012, another up-the-middle position. But he only played five games there in 2013. He was a corner infielder (1B, 3B). And MLB Trade Rumors goes on to say that teams are interested in him as a corner infielder. Seriously.

Betancourt played 68 games at first base for the Brewers last season and 59 games at third. Last time I checked, those positions are considered offensive positions where a little defense is nice to have as well. And every time I check, I see that Betancourt has never been an offensive player. Well, he has been offensive, but that is a different use of the word.

Consider that Betancourt has a career walk rate of 3.3%. Consider that "Plate Discipline" and Yuniesky Betancourt are not synonyms. So he is a horrible offensive player. But he is also a terrible fielder. Fangraphs has his fielding at -63 runs. B-R puts that figure at -74 runs. So why exactly are teams beating down his door?

Since 2009, or from 2009 to 2013, Yuniesky Betancourt has been the worst player in baseball according to Fangraphs' leaderboard. If you set those years as parameters, his value in that time is -4.6. Nobody else is close. The next player to him is -3.6 (Kotsay). If you play with the headings, he has been the worst offensive player, even worse than that catcher named, Mathis. And he has been the 69th worst fielder (out of over 300 players!).

Let's get back to this replacement idea. I see no reason to believe that the Brewers could have done worse using Triple-A guys like Scooter Gennett or Hunter Morris in place of Betancourt. There is no way they could have provided less value on the field. And they would have been hundreds of thousands of dollars cheaper.

According to most reports, Betancourt is not a guy who is fine with a supporting role. He wants to play. He agitates to play. He still considers himself a starting player. So even if you go with the Joe Maddon-ish idea that Betancourt has some value because he can play five positions--which I don't--you still have a guy who isn't wired to think that way. Oh, he will do it. But he does not consider himself a role player. Well, maybe he does now, I don't know.

But still. The idea is that you fill your roster with guys who can at least be replacement level or better. Betancourt has not been that guy since at least 2009 and before that was a starter playing at close to replacement value. Yuniesky Betancourt is not a guy who is going to give you replacement value. Instead, he will cost a team close to a million dollars to be worse than replacement. And yet somehow, his career just keeps on going. Another contract and he will get his full ten-year pension in. And that, folks, is truly remarkable.
Posted by William J. Tasker at 7:33 AM No comments: