I thought I would write about how well Edwin Encarnacion's bat has kicked in lately with his 1.111 OPS and 14 RBIs in his last twelve games and what that has meant to the Blue Jays. But a picture really is worth a thousand words: 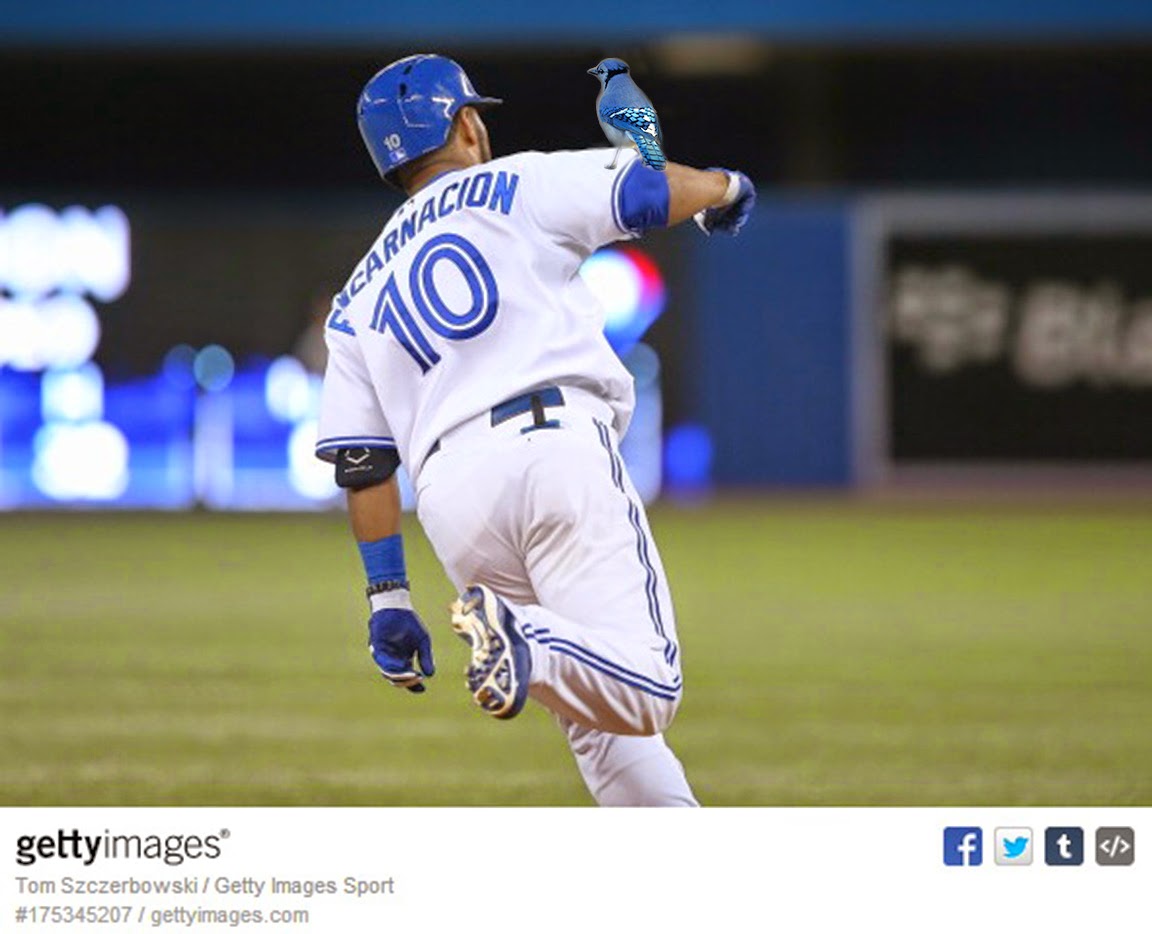 Posted by William J. Tasker at 2:08 PM No comments:

Another day, another day that wasn't very good. At least I finished a pick over .500 this time and at least I was .500 on extra-inning games. But days like yesterday are extremely frustrating and, of course, the Game of the Day was wrong again. Amazing. The Marlins' streak ended in a big way. I told you Jose Fernandez is not the same on the road. Why did I not listen to myself? Phil Hughes. Phil freakin' Hughes. That's all I'm going to say there.

It was a real shame that Yu Darvish lost his no-hitter with two out in the ninth. I get the feeling that Ian Kinsler on defense would have made a difference there. But he plays for the Tigers now.

When the Texas Rangers signed Shin-Soo Choo to a very nice chunk of change many writers panned the idea a bit and mentioned that 2013 was a bit out of line with the rest of Choo's career and that he was a target for regression. Surprisingly, I was not one of those writers. It has not been noteworthy since the Rangers have struggled out of the gate, but Choo is having an even better year so far in 2014.
So far this season, Choo is second in baseball in on-base percentage. He is third in wOBA and wRC+ and is 20th overall in fWAR. Consider what I consider the best stat thus far: In 30 games, Choo has been on base 62 times!  That includes five HBPs, 34 hits and 23 walks. He is tied for fifth in that category and eighth in runs created. Choo has been sensational.
Here is a ridiculous stat for you: Of all of the pitches Choo has seen out of the strike zone, he has only swung at 14.8% of them. That puts him second in baseball behind Joyce of the Rays (really!? who knew?).
The .343 batting average is going to come down. After all, his BABIP is .419 and you should not be able to sustain that kind of average on balls in play. Plus, his number of infield hits is by far the highest of his career. On the other hand, he currently is sporting his highest line drive percentage of his career (full time years) and that helps.
A couple of other numbers you should know. First, his swinging strike percentage is easily the lowest of his career. Between his 17.8% walk rate, his low swinging at strikes out of the strike zone and his low swinging strike percentage, it is obvious that Choo is very locked in at the plate and has a definite plan of attack when he gets there.
Choo's current fWAR of 1.3 is ahead of the pace to have him blow past of the 5.2 fWAR he accumulated last season. Playing left field instead of being out of position in center like he was for the Reds helps out too. Choo won't be nearly as hurt by his defensive numbers as last year. On the other hand, his defense is less valued in a corner outfield position than it would be in center field.
Oh, and in case you are saying, "Yeah, yeah, but look where he plays his home games." I might tend to agree with those sentiments if it wasn't for the face that Choo is sporting a 1.410 OPS on the road compared to .723 at home. That is strange, eh? Ah, the wonder of early season short sample sizes.
Small sample size or not, Shin-Soo Choo is having another great season. And the offensive numbers he put up in 2013 are showing more and more to be his norm and not some sort of fluke season.
Posted by William J. Tasker at 12:55 PM No comments:

I can at least say I had one good day this week. And, no, Thursday was not that day as I again fell into negative territory. There were two extra-inning games and both went the opposite way of the picks. I am keeping track of those because they irk me. In the last eight extra-inning games, I am 1-7 with the outcomes. That hurts the bottom line a lot.

Houston destroyed the Tigers. George Springer hit his first homer. Drew Smyly wasn't smyling. The Orioles beat the Rays again and David Price. I didn't see that coming. My biggest mistake was letting my heart get in the way by picking the White Sox. Alas, Scott Carroll was hammered.

Ah! That is the sound of basking in a much better day than I have had in a while. A lot of the picks came in on Wednesday. I correctly picked both ends of the A's / Mariners' double-header. The only blemishes on the evening were the Orioles over the Rays, the Cardinals over the Braves, and the Diamondbacks over the Brewers. That's it. After the way most of this month has gone. it feels good.

After hitting 97 combined homers in 2010 and 2011, things got a little sleepy for Jose Bautista and the baseball world has sort of forgotten him. A severe wrist injury and surgery limited him the last two seasons and cut down his production...though few would probably guess he hit 55 homers combined in 2012 and 2013. But the big bat is back in Toronto and better than ever.
Here are some quick facts about Jose Bautista so far in 2014:
The best part for Blue Jays fans is that none of his numbers jump out as fluky. We don't have a guy here with an ultra-high BABIP or freakish home run to fly ball numbers that should dip as the season goes along.
All it appears is that Jose Bautista is now fully healed from his former wrist problems and is back to where he was in 2011. Thirty-five or more homers, 110 or more runs scored, 100 or more RBIs, 100 or more walks all seem very doable for Bautista, especially when you consider that Encarnacion hitting behind him has been off to a sluggish start. Jose Bautista is again among the elite offensive players in the game today.
Posted by William J. Tasker at 8:05 AM 2 comments:

Gosh, I'm doing terrible lately. The extra inning games are killing me to the tune of 1-5 over the last two days. The Angels blew a lead (but I'm happy about that one). The Brewers blew a lead. The Cardinals could not beat Gavin Floyd for crying out loud. Hector Noesi pitched well. What the heck is going on here!? Hector Noesi!?

The good news was that I finally had a Game of the Day pick go my way. The bad news was that a lot of the rest of the picks messed up. The biggest thing that hurt me yesterday was the three extra-inning games. All three ended up on the opposite side of what I predicted. Now that is lousy luck right there.

After all these decades as a baseball fan and my last twelve years as a writer of the same, I had resisted fantasy baseball. I had tried fantasy football years earlier and hated it because I was rooting for players to do well against my favorite teams and it was too confusing. But peer pressure by my colleagues over at It's About the Money, Stupid, set me up to give it a shot this year. After the first five weeks of the season, I am not doing too badly.
I liked the name of my team: "Nights in Josh Satin." It's an ode to the Moody Blues. And I felt I did well in the draft and have made some decent pick ups on waivers. Here is my current team:
Pitchers: Stephen Strasburg, Francisco Liriano, Yovani Gallardo, Martin Perez, Jesse Chavez, Mark Buehrle, Tommy Hunter, Tyler Thornburg, Carlos Martinez and Marcus Stroman.
That seems pretty strong to me. But I never seem to get a day where more than one of those starters pitch on the same day and when they do, they seem to cancel each other out. Hunter has eight saves, but they are never clean and his strikeouts are down. Thornburg and Martinez have been inconsistent. That kind of talent should be getting me better results than they have currently.
My position players: Carlos Ruiz. (I had Wilin Rosario, but he just went on the DL and I can't seem to get myself to carry more than one catcher since they only play five days a week.) Albert Pujols, Mike Trout, Jayson Werth, Xander Bogaerts, Ian Kinsler, Josh Donaldson, Wil Myers, Ian Desmond, Matt Adams, Adam Eaton, Jedd Gyorko and George Springer.
Adams is hitting well, but not for power. Springer was supposed to be a duel power and stolen base threat. Not so far. I thought I'd get more from Bogaerts and even Trout has been a little sleepy. I can't complain. I usually get good offense and have enough variety to cover off days.
In a twelve-team league, I am currently in sixth place. I am a distant 44 and a half games behind The Overlord, otherwise known as Jason Rosenberg. And so it seems that I am simply treading water.
Maybe I'll get better as the season goes along. I have enjoyed it more than I thought I would. I just feel like I am still fishing for the right combinations. Do I need more relievers? How much do starters matter more than utility positions? Should I waste a position on a backup catcher? I have no clue. I follow a lot of fantasy experts like Chris McBrien (@cmcbrien) but I am not going to lean on them as a rookie at this.
I'll just muddle through. After all, it's my first attempt and I am ahead of six other teams!
Posted by William J. Tasker at 8:04 AM No comments:

Buenos Cinco de Mayo amigos! Sunday was a struggle all day and when all the day games finished, the picks were sitting at 7-7. A positive (though not very good) result depended on the Cardinals beating the Cubs on Sunday Night Baseball which translates to: "Way too late to be well rested on a Monday morning."

Remember, I had picked the Cardinals for the past two days and the Cubs had won them both. I picked the Cards again on Sunday, so I wasn't in a good situation. I felt better after the Cards took a 3-0 lead and held it to the bottom of the fourth when Lynn gave up two runs to make it 3-2.

When the Cardinals brought in Carlos Martinez in the seventh, I knew he was going to screw up because he is on my fantasy team. And he did. But somehow the Cardinals scored two runs in the top of the ninth, held on through a scare in the bottom of the ninth and won by a run. Whew! I finished over .500!

Speaking of over .500, have you noticed that every team in the NL East is over that mark? Very cool.

Saturday reversed the day from Friday. After only getting five correct on the latter, only five were incorrect for the former. Even so, the Game of the Day feature was wrong again, which is infuriating. Julio Teheran was great but gave up three solo homers. And on the other side, Ryan Vogelsong had command issues, but was aided by two double-plays and a caught stealing. Another pick was aided this time from the Blue Jays' total inability to put a game away. That team's bullpen is a total disaster right now.