I read a great piece by Stacey Gotsulias on It's About the Money, Stupid as she remembered the terrible 1990 New York Yankees team. There was one mention in the story that piqued my attention: Deion Sanders. Somehow I had forgotten that he began his baseball career as a member of the Yankees. I probably have erased the fact from my memory because Sanders did nothing really memorable for the Yankees and it was not until he went to the Braves that he had some interesting seasons.  As I do whenever I am curious, I quickly glanced at Deion Sanders' player page on Baseball-reference.com. One set of numbers really caught my eye: 14/6.

The year was 1992 and it proved to be Sanders' best year in baseball. Don't get me wrong, to be a two-sport athlete with both the MLB and NFL on your resume is pretty astounding and worthy of admiration. But for most of his time in the Majors, Sanders really was not all that great a player. He had three good seasons out of nine (most were partial seasons, which again was amazing as he split time with his NFL duties). But he was very good in 1992.

Sanders played 97 games for the Braves in 1992 and still compiled 3.2 rWAR. He was a plus center fielder that season with an .841 OPS and 130 OPS+. He also had one of the most memorable World Series in a losing cause against the Blue Jays that season. He came to the plate 17 times in that World Series and got on base ten of them. Call it David Ortiz without the homers.

Okay, but here is the part that caught my eye. That season (1992), he hit fourteen triples. He also hit eight homers. But he only hit six doubles. Fourteen triples and only six doubles. That seemed very odd to me. The guy was blazing fast and it makes sense he would rarely stop at second and head right for third. But these numbers seemed freakish.

If you look at the most recent prolific triples hitters like Jimmy Rollins and Curtis Granderson, the years they hit a lot of triples, they also hit a lot of doubles and homers. So I did some quick work on B-R's Play Index and it turns out that nobody had ever done what Sanders did (with at least ten or more triples) before 1992 or since.

Nobody in baseball has ever had a higher triples to doubles ratio when hitting more than ten triples. The closest anyone ever came to Sanders' 2.33 ratio was Edd Roush who, in 1916, hit 15 triples and seven doubles (a 2.14 ratio). Nobody else ever had a higher than 2 to 1 triple to double ratio. Chief Wilson in 1912 came close with 36 triples and 19 doubles.

I hugely enjoyed both Deion Sanders' and Bo Jackson's careers. What they did was remarkable and I wonder if we will ever see the likes of that again. But what I like best about baseball is that there are always these odd little stats to discover like 1992 when Sanders hit 14 triples and only six doubles.
Posted by William J. Tasker at 4:21 PM No comments:

There are several discussion points or "memes" thrown around all the time that get my dander up. One of them is, "He plays to win." Gosh, athletes are competitors, so wouldn't like 97% of them play to win? Another large one lately is when a player is labeled, "injury prone" or "brittle." This last one is highly amplified by the recent free agent signings of Jacoby Ellsbury by the Yankees and Josh Johnson by the Padres. Ellsbury's signing, of course, was a big deal because of the Yankees/Red Sox angle and that the deal was so large and for seven years. Ellsbury was quickly stated by many to be injury prone. I have heard of measuring skill sets. But measuring a guy's ability to stay healthy? Come on.

Josh Johnson has missed a significant number of starts in four of his eight full big league seasons. Thus he is injury prone. Scott Kazmir miss years and had lost his fastball before he disappeared. So he is injury prone. What are we measuring here? Are we saying that some guys were born with more of a dark cloud over the heads? Are we saying that some guys are babies who go on the disabled list for every other thing? Do some players have a disposition to get hurt? Coco Crisp comes to mind there the way he throws his body all over the outfield when he plays out there. But even so, how much are injuries just random, freak events?

2013 was a banner year for injuries according to a great story by Jeff Zimmerman of Fangraphs.com. According to Zimmerman's data, there were 29,504 days lost by players to the disabled list. That is astounding. I found a different way of looking at it.

If there are eight position players on each team and there are thirty teams, that leaves 240 possible times where a player can play in 150 games (I didn't count the DH). Obviously, there are platoon situations that prevent that happening and some players prove to be poor during the season and are replaced. So that prevents many from playing in 150 or more games. What would you say that figure to be? Maybe half? Less than half?

According to my data, the last three years have shown a sharp decrease in both areas. Here is my data:

And here it is in graph form: 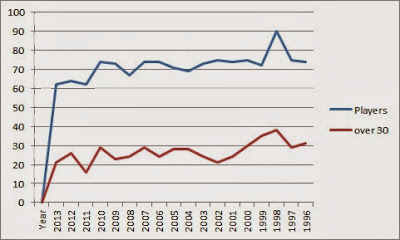 Looking over this data and combining it with Zimmerman's stuff just reinforces the idea that a lot of players are getting hurt. This stuff just happens. Occasionally, you get a player where it seems to happen a lot. There is Tulowitzki and even Brett Gardner. In the past, George Brett and Mickey Mantle were considered injury prone.

I consider most of these players to have been unfortunate. They have missed more than their share of games due to injury. Does that mean they are injury prone? Or does that just mean they have been unlucky?

And does such bad luck predict what will happen in the future? Unless it is a chronic injury such as Nick Johnson's wrist or Mantle's knee, I don't think that is fair or accurate. The odds of the Tulowitzki, Gardner, Johnson and, yeah, Ellsbury staying healthy in 2014 and each year beyond seem just the same as not.

Players get hurt all the time. They hit the bags wrong when they slide or step on them. The dive and bounce off walls. They fall into seats. They get hit by pitches. These all seem random. I'm not a good numbers guy. I cannot give you foolproof data. But from my perspective, this injury prone stuff is all phooey. And every time somebody says that a guy is injury prone and it has nothing to do with a chronic problem, my teeth will continue to grit.

Posted by William J. Tasker at 7:40 AM No comments:

Twenty-three free agent signings have been noted thus far, not including minor league deals. And so far, the cost per win above replacement has risen. It was not long ago that the cost per win was around $3.9 million. At the start of last year (if memory serves me correctly), that figure had risen to about $4.6. Fangraphs.com, for example, has risen its valuation from that figure to its current $5 million per win. To date, free agents are getting paid an average of $5.29 per win.

And that makes sense since free agents are usually signed in a bidding war for services going to the victor. Well...it makes sense for the top free agents. But relief pitchers--of which Rob Neyer famously called, "fungible"--and utility infielders are getting far above the current $5 million value.

I still think a team's strongest minor league infielder would do just as well as a utility infielder and make far less money.

To get my values, I averaged each player's fWAR over the last three seasons. Perhaps GMs go five years, I don't know. And then I divided the average yearly value of each contract by the three-year fWAR average to get a cost per win.

Nick Punto, on the other hand, got a one year deal worth $3 million and has averaged 1.37 fWAR per season the last three years which means his contract is paying $2.19 million per win. His agent should get fired.

Willie Bloomquist, as all of Twitter is attesting, just got a screaming deal from the Mariners that is worth $8.79 million per win. He either has a great agent or met a dumb GM. You decide.

So far, according to my list, backup outfielders are underpaid, relievers are overpaid and the cost of utility infielders is all over the place. Starting pitchers are overpaid too. Phil Hughes and Tim Hudson both were given over $5 million per win contracts.

Just for my own curiosity, I will follow this and write updates once in a while. While WAR is not the be all and end all for how GMs must value free agents, it is interesting to see how each free agent makes out.

Posted by William J. Tasker at 8:20 PM No comments: