Oh, man. Back in the crapper I go. After a successful week that followed a prolonged slump, the picks went into the dumpster last night. The day started off just fine with a 3-1 start. But the lone wrong pick of those four was Scott Kazmir pitching a brilliant game against the Twins. From then on, Led Zeppelin started playing and Robert Plant was singing Kazmir. Whoa, whoa. And the most fitting loss was Cole Hamels whose team scored three runs for him in the second inning and never scored again. That, of course, was the Game of the Day and Hamels is now 2-11. Unfreaking amazing.

Whelp, all I can do is keep picking because the schedule remains relentless as baseball day follows baseball day. Here are Saturday's picks:

And the Game of the Day:

Separate Mauer from the money

If you do a Google search on baseball's worst contracts and look them over, Joe Mauer's name comes up a lot. Heck, even Head and Shoulders gave up on him. And the famous, "Well played, Mauer," commercial seems far in the past. All of that is because of the contract Mauer signed. And that happens a lot. You heard it when Beltran played for the Mets. You have heard it with Soriano with the Cubs. And yet, I always believe you cannot blame the player for the money he makes. And often times, that money obscures how good a player still is. Joe Mauer is still one of the best catchers in the game. It just does not feel like it because of the money.

Quick, who led the American League in on-base percentage last year? No, it was not Cabrera or Trout. It was Joe Mauer. Mauer also suffers because of the one year when he hit 28 homers (2009). We all know now that was a fluke much like the year Wade Boggs hit that many homers with the Red Sox. But that did not mean that Boggs was a bust after that season, and neither is Joe Mauer.

Would you guess that Joe Mauer currently ranks second among catchers in the majors in fWAR according to Fangraphs.com's leaderboard? Would you guess that he is fourth in the American League in batting and third in on-base percentage? How about that he is sixth in wOBA and wRC+? The guy flat out rakes on a regular basis, but the picture is always clouded by the money.

Joe Mauer is only 30 years old. He has only played ten years. And yet he is already seventeenth among catchers all time in WAR. And he will be rising up that leaderboard quickly. I like to look at baseball-reference.com's way of parsing out a player's stats per 162 games. When they do that with Mauer, he averages 195 hits, 89 walks and 39 doubles.

He has already won three batting titles. He is a catcher. That just does not happen. And check out his lifetime triple slash line compared to this year:
First, you see the consistency. Then, you see that he is over his career numbers in all three. The guy is a stud. And here are two facts about that on-base percentage: First, his last two seasons have been over his career average. And secondly, he has more career walks than strikeouts. How many of today's players can say that?

And then there is the quality of his batted balls. Joe Mauer's line drive percentage this year is 28%! Wow. And that can hardly be called a fluke. Mauer has had a line drive rate over 22% in eight of his ten seasons. His career average is an incredible 23.4%.

Joe Mauer is judged by the money he makes and that is unfortunate. He will make $23 million a year until like forever. He was only worth $21.5 million last year. His season this year is already worth $15.5 million. The bum. Fault the Twins if you would like to fault anyone about his contract. But separate the player from the money and appreciate that Joe Mauer is one of the best catchers ever and is truly a special player by any of today's standards.
Posted by William J. Tasker at 7:21 AM 5 comments:

After picking to the tune of 22-10 over the past two months, I was hoping that I was over my long picking slump. That hope was misguided. Yesterday's picks limped into a 6-6 record and back to mediocrity. It was a screwy night. Felix Hernandez had an 8-2 lead over the Angels. That was safe right? Wrong. Jonathon Niese had to leave the game early after experiencing pain in his shoulder. The Braves went scoreless in five and two-thirds innings against Mets' relievers. The Marlins scored only two runs against the Giants. But that was enough as Tom Koehler won his first game. The Brewers blew a save (go figure) and lost to the Astros in extras. It was Pedro Alvarez five, the Reds three. So yeah, it was a tough night.

Posted by William J. Tasker at 6:32 AM No comments:

Finally! A good day of picking! Oh, man, did I need that. There were only four incorrect picks out of sixteen. They were: The Yankees second game, where they were as limp as a noodle; The Marlins, which was a stupid pick; The Pirates (and that took thirteen innings to go wrong) and the Red Sox, who had their hands full with the Rays. Otherwise, spot on. There were two blown saves last night. One helped me when Jonathan Papelbon blew one and the other was the Pirates Jason Grilli, which was unusual, and led to that pick going bad.

There are twelve games on the schedule tonight, which is a lot for a Thursday. Here are the picks:

Posted by William J. Tasker at 7:13 AM No comments:

Wheeler and Harvey - some serious heat

Yesterday could not have been better for Mets fans. Not only did they sweep a double-header in Atlanta, something most would term impossible, but they did it with a bookend of two of the brightest pitching phenoms in the game with Matt Harvey and Zack Wheeler. The Atlanta Braves saw some serious heat yesterday.

According to Brooksbaseball.net, here is the fastball breakdown of the two pitchers:
Woof. That is some serious gas spread out over a lot of pitches. The two pitchers pitched a total of 13 innings and struck out 20 batters. They allowed seven hits. They allowed three total runs and only one extra base hit (Uggla's double off of Wheeler). Between the two pitchers, they induced 36 swing and misses total. Wow!

The Mets have had a lot of sad times. The ownership situation and several down years have kept the fan base restless and even, at times, angry. Yesterday's double-header and the promise shown by Harvey and Wheeler had to be a strong salve on those hard times. Mets fans deserved yesterday. These two young pitchers should have them buzzing. They should have all of us buzzing.
Posted by William J. Tasker at 8:15 AM No comments:

I went 4-0 in double headers yesterday including predicting the Mets would sweep the Braves. But then  I went 6-6 on everything else. Sheesh. I had three aces going in Justin Verlander, Yu Darvish and Adam Wainwright. They all lost. And Verlander was for the Game of the Day. I should start calling that feature the poop pick of the day. The Game of the Day is not the most exciting game. It is the game each day that I think is the easiest pick. It is a game that should be a slam dunk of a pick. The feature is 23-24 since May 1, when it stood at 22-8. I love my job here.

At least the 10-6 total record yesterday finally pushed the month of June back over the .500 mark.

And the Game of the Day

When you start off a picking night at 5-1 and only twelve games are on the schedule, things should go pretty well, right? Wrong. The rest of the picks went 1-5 to add up to another mediocre day of picking. Here was the best idea that happened along the way: With a tie game in the ninth and Giancarlo Stanton up, why not shake off the catcher and throw him a fastball. That was a good idea, Heath Bell. The Giants allowed the Padres 24 base runners in 13 innings pitched. Sooner or later, any team is going to cash in on that. And the Padres did. Just another night in unpredictable baseball.

My goodness! There are seventeen games on the schedule with two double-headers! Tuesday's picks:

And the winner is Benjamin Shoptaw! The eight and a half year old son of Cardinals writer, Daniel Shoptaw (@C70), participated along with his six year old sister, Sarah, and Dad against yours truly in a game picking contest yesterday. Benjamin went 9-6 with the picks while Daniel and I both went 8-7. Sarah had six games correct. I will be offering young Benjamin a contract within the next couple of days or so. Heh.

But it was great fun and proved, once again, how difficult it is to pick baseball games. On any given day, any team can win no matter how bad a team they are. And conversely, any team can lose no matter how good a team they are. Thank you so much, Shoptaw Family, for the great fun and who wants to be next? Maybe we can have a challenge like this every Sunday! 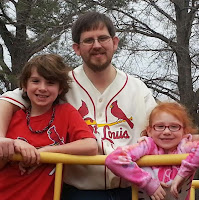 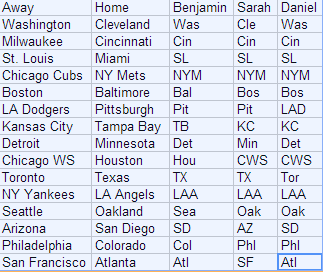 Posted by William J. Tasker at 6:37 AM No comments: