Welcome the the American League, Astros

Major League Baseball history will occur in a few months as the Houston Astros switch to the American League. The move and its timing could not have been worse for the team's fans. Read all about it in this month's issue of Big Leagues Monthly. Inside you will find this article but also sixty pages of terrific baseball writing.
Posted by William J. Tasker at 10:21 AM No comments:

Judging Alfonso Soriano by his contract

When a baseball player signs a historically bad contract, he ceases to be judged by his play on the field. Instead he is judged against his contract. There seems to be something unfair about that. Alfonso Soriano, like Zito on the Giants, will always be looked at with skepticism. He is ridiculed and derided for the fact that he cannot earn his pay. Is that really fair? The Cubs, who gave Soriano that contract, should be the ones ridiculed. They are the ones that gave him all that money. Because if you take away the money, Soriano has not been that bad a player for the Cubs.

It is not like Alfonso Soriano rolled up in a ball and quit playing. To date, the Cubs have paid him $97 million. And according to Fangraphs, Soriano has been worth $84.3 million for his time with the team. That's not terrible. Average that out over six seasons with the Cubs and that is an average playing value of $16.05 million a season. How would we perceive Soriano if he did not make that kind of money? We would perceive him totally different.

First, we all know that Soriano has holes in his game. He will never be the prettiest outfielder. And that was after he was a pretty disastrous second baseman. He has not had a Hall of Fame career. But he has had a nice career. His career wOBA is .351--not Hall of Fame material, but productive nonetheless. His career triple slash line is: .273/.323/.505. He has 836 career extra base hits including 372 homers. He has scored more than a thousand runs and driven in more than a thousand runs.

And how come a guy like Soriano is not given the benefit of the doubt when he was underpaid for several years before he struck it rich? Soriano has built a playing value (again, according to Fangraphs) of $147 million in his career and he has been paid $121+ million. In the grand scheme of things, he has earned his keep.

There is an inherent unfairness that Soriano will always be judged for his contract. It seems petty. This has been stated many times in this space, but bears repeating one more time: Which of us would not put a pen to such a contract? Which of us has ever said to our bosses, "No, really, Joe, you are overpaying me. Stop it already." None of us.

What a player makes is the team's problem and purview. The team either takes a gamble or a calculated risk. Sometimes the team loses. The Cubs lost this one. That has nothing to do with Soriano. Their decision should not make Soriano a scorned and ridiculed player. Separate the player from his contract. And when you do that, Alfonso Soriano has given baseball more good moments than bad ones.
Posted by William J. Tasker at 7:38 AM 2 comments:

Kevin Youkilis became the latest in a long, long line of aging ballplayers the Yankees have signed over the years hoping to wring one last cup of tea from the old teabag. Before Youkilis, there was Chavez and Ibanez and before that Sheffield and Mondesi and before that Boggs and it goes on and on. And quite often, the ploy has worked. Chavez and Ichiro worked wonders in their time in New York. And so the Youkilis deal makes sense if you see this history. And everyone knows that Youkilis has steadily declined over the last two seasons and has had trouble staying on the field. The answer of why that has happened is easy to see and lies largely in his platoon splits.

Youkilis does have a pronounced split for his career. But not overly drastic. Against left-handed pitching in his career, he has an OPS of .928 with a triple slash line of: .298/.417/.511 compared to an OPS of .843 against right-handed pitching with a triple slash line of .277/.371/.471.  It is doubtful that anyone would sneeze at those kinds of numbers.

But his ability to hit pitchers who throw from the right side has a distinct curve of growth from the early part of his career to a peak and then a decline and suddenly a cliff. Here are his OPS and strikeout percentages against right-handed pitching for his career:

If you have trouble seeing the numbers, just click on them. To see those numbers put in chart form: 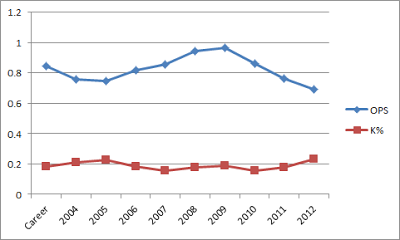 The blue line on the chart is his OPS and the red line is his strikeout percentage. wOBA shows a similar curve pattern, so there is no need to use that as corroborating evidence.

The fact is that Youkilis did just fine against left-handed pitching the last two seasons with OPS figures of .987 and .878 respectively.

The guess here would be the effects of aging combined with his unorthodox stance and approach. There is a lot that has to happen to get a bat from that high above your head to the hitting zone. When Youkilis was younger, he was probably much quicker in getting that to happen against right-handed pitching. Now that he is older, he is not getting there as quickly and is easier to fool.

He gets a slightly longer look from pitchers who throw from the left side and can adjust to the pitch more effectively.

The big question is whether or not Youkilis is open to change. If so, Yankees batting coach, Kevin Long, helped Curtis Granderson with split problems Granderson had against left-handed pitching. But Youkilis will need to be open to such a change.

The situation is similar to what Yastrzemski did with the Red Sox years ago. Yaz also had a pronounced stance with the bat high over his head. When he got older, he made a sudden move to lower his hand position in his stance and it probably helped him last long enough to pad enough numbers for the Hall of Fame.

Youkilis probably started too late in his life to pile up necessary numbers for any post-career accolades. But this guy used to be one of the most feared hitters in baseball. If he is going to help the Yankees and rebuilt his offensive reputation, he is going to have to adjust now that he is older to hit right-handed pitching and he needs to do so in a hurry after such a precipitous fall. If he does not adjust and continues this trend, he better stash these paychecks away as he won't see them again..

Five reasons why Michael Young will bounce back with the Phillies

Rangers fans are left this week pondering the mixed legacy of their now departed Michael Young. As a legacy member of that team, Young had produced far more positive moments for the Rangers than the other way around. But his contract--which is not his fault--combined with two episodes of whining at position changes despite that contract--which is his fault--led to a falloff of some of that fan ardor. Add to the mix his horrid 2012 and the prospect of less playing time in 2013 and you have the perfect timing of his trade to the Phillies. And while it is true that he has little way else to go but up after last season, there are reasons to suspect that he will bounce back for his new team.

Let's look at five good reasons why Michael Young will bounce back in 2013:

Look, Mighael Young has always been a mixed bag as a player. He has compiled better than decent wins above replacement on offense while losing a third of that total with his defense. He was overrated and overpaid with the Rangers. But on the Phillies, all he has to do is his part and he will help what was a pretty pathetic offense in Philadelphia this past season. Write it down: Michael Young is going to have a bounce back season.