By the time the first three games had been completed, the picks were already 0-3. And things only slightly improved after that. For example, I watched the Red Sox not able to do anything against Vidal Nuno and I was shocked. How did that happen?  The Tigers lost another game Justin Verlander pitched...again. He did pitch well though. The 1-10 Brandon McCarthy won! Now he is 2-10, but that was the wrong pick. And so it went.
I am a bit excited about one development though. Something like the last seven extra-inning games have gone my way. The tide has turned there somehow!
There are TWO double-headers today. That is seventeen games! Whow! Saturday's picks:
And the Game of the Day:
Yesterday: 7-9, June: 200-171, Games of the Day: 43-41, Season: 654-552
Posted by William J. Tasker at 9:39 AM No comments:

My son and I had the pleasure of going to see the Palm Beach Cardinals host the Charlotte Stone Crabs (Tampa Bay Rays) in a Florida League battle of High-A baseball at Roger Dean Stadium in Jupiter, Florida. First, it was fun to see a game with my boy, who shares my baseball passion. And secondly, it was nice to take in a minor league game in an intimate setting, something only minor league baseball can provide. 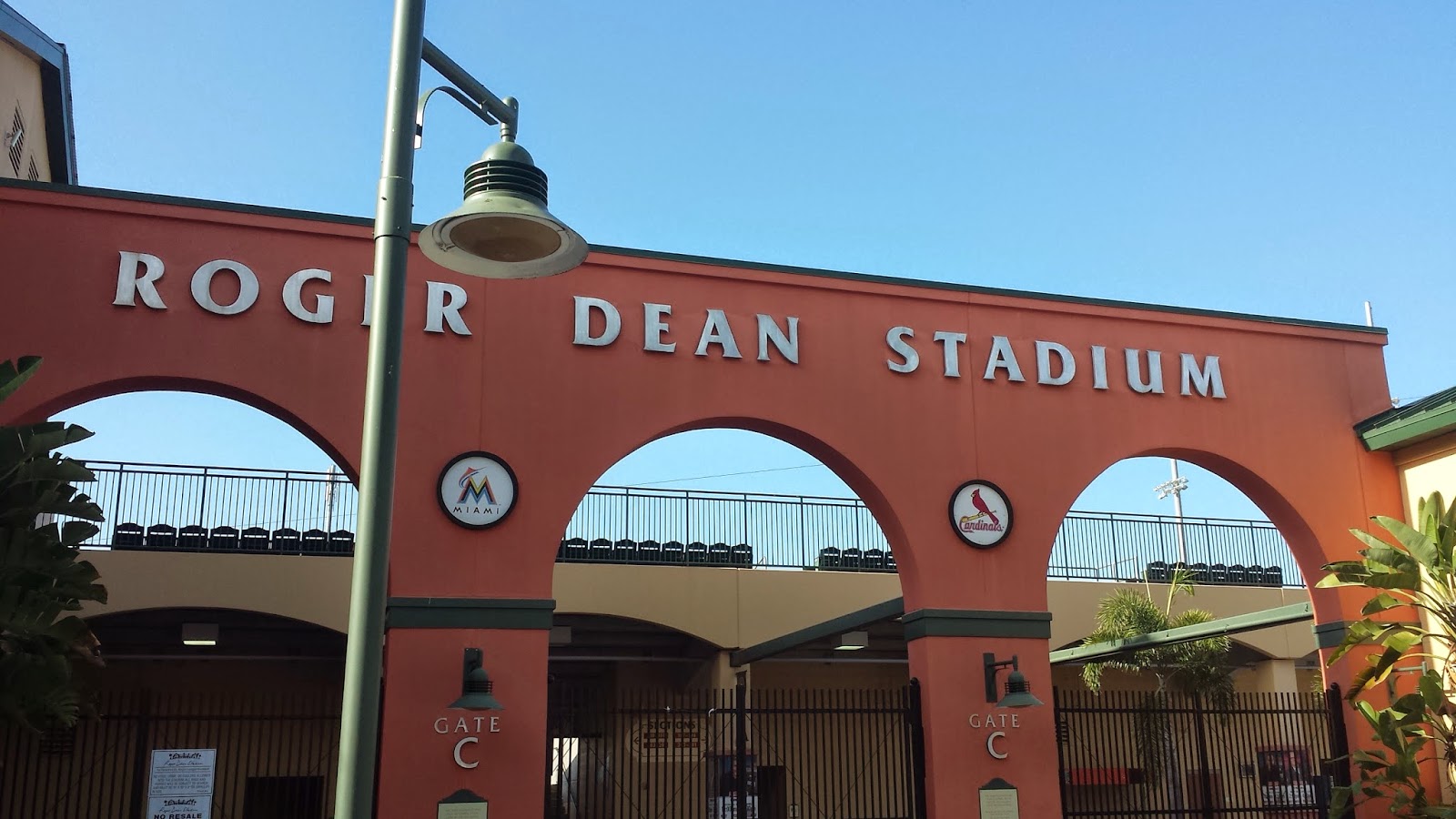 The stadium, unfortunately, only had a few hundred fans show up and the concession stands were limited as a result. We sat in Section 107, just behind the home dugout, which was very hot until the sun went down, but that did not take away from the enjoyment of the game.
In minor league baseball, you can hear the players and coaches talking. You can hear their cleats when they run the bases. You can hear the ball hitting the infield between innings as the first baseman warms up the infielders. Stadium employees bring kids on the field for a variety of sponsored games to win prizes. Everything is magnified in its closeness. Foul balls are sudden, the speed of the pitcher evident and the arms of infielders show that this is professional baseball, even if it is a long way from the Big Leagues. 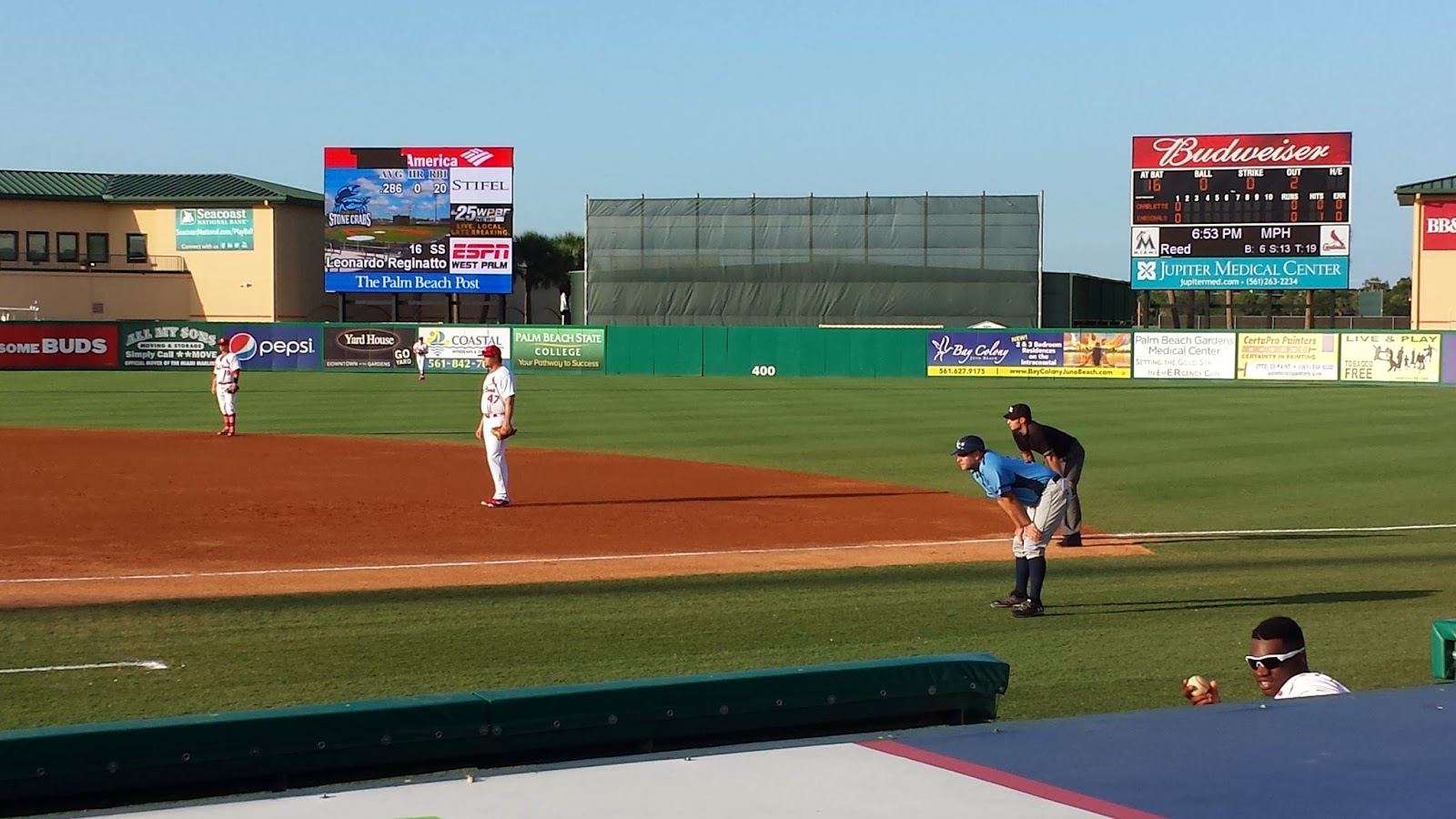 In minor league baseball, the stadium's sound man can get away with playing the Three's Company theme song when the manager goes to the mound or Peter Griffin's voice from The Family Guy laughing when an opposing batter struck out looking. And since the Cardinals' Jimmy Reed was making his High-A debut, the announcer gleefully read Reed's statistics (all zeroes, of course). It's baseball at it's most enjoyable.
The Cardinals won the game, roughing up the Stone Crabs' starter Reinaldo Lopez. But to be sure, one of the weaknesses of a weak Stone Crabs' unit is the team's defense and Lopez was not aided greatly there.
Reed is a good prospect according to some Cardinal sites, one even ranked him second in the Cards' system. I am no scout, so I could not tell why. He sat most of the game at 85-87 with his fastball but he did seem to have good breaking stuff that the Stone Crabs could not do much with. When he got men on base, he was able to entice two double-plays to get out of jams. He gave up two runs in 6.2 innings and was efficient and threw a lot of strikes. 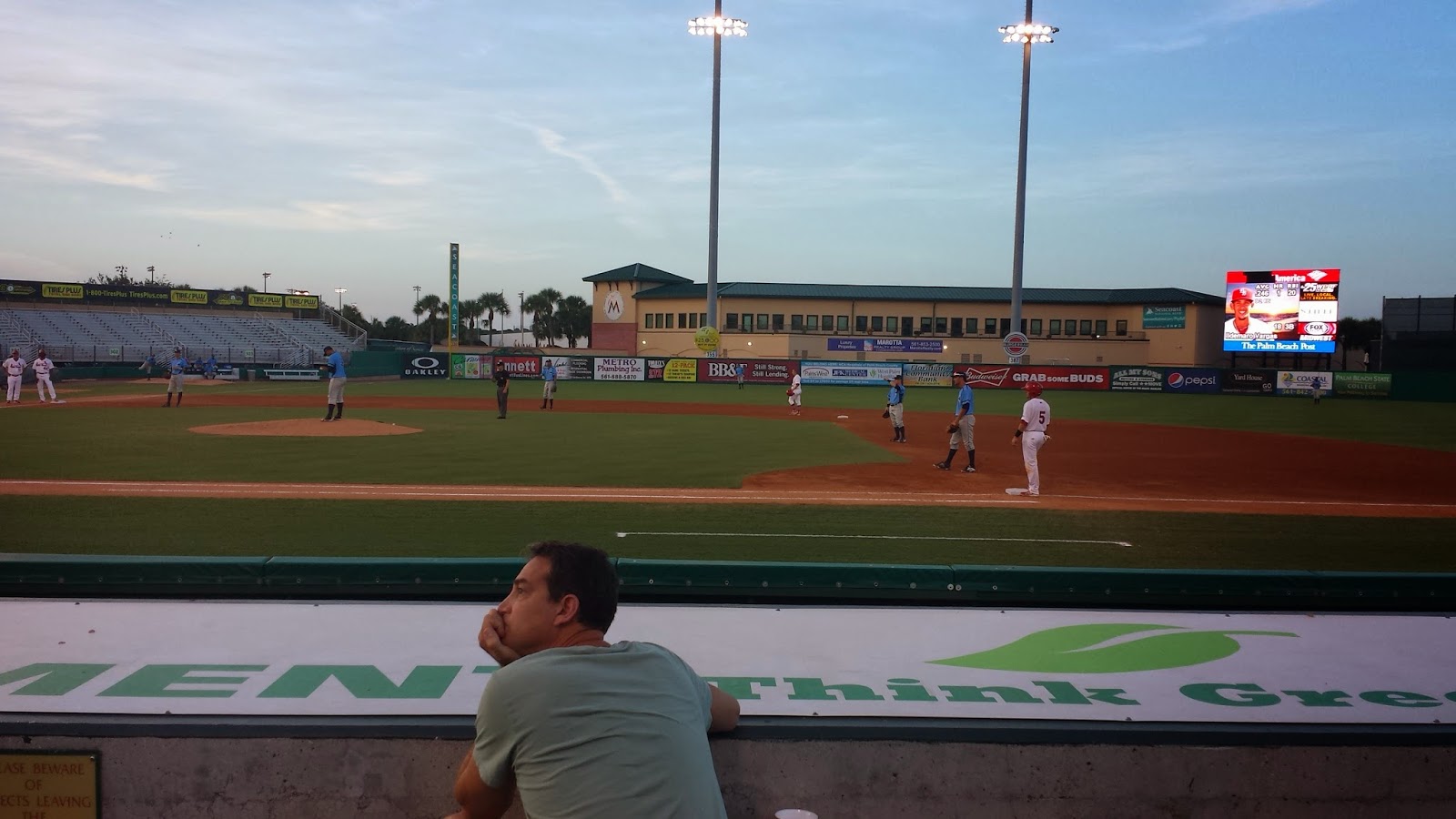 The real fun was the guy who followed Reed for the Cardinals. His name is Sam Tuivailala. We had no idea how to pronounce the guy's name so we said, "lalalalala," a lot. But the guy could throw the gas. He threw an easy 97-98 and blew it by a lot of hitters. His breaking stuff had a lot of spin, but he had little command of it. H did give up a run in an inning and a third, but he also struck out two and is blowing people away at a rate of over 15 strikeouts per nine. He was impressive.
None of the Stone Crabs' pitchers impressed me. I was only impressed with three of their position players. One was the catcher, Justin O'Conner. He did not hit in this game, but his receiving skills looked top notch. Conversely, shortstop, Leonardo Reginatto, had three hits but was totally unimpressive in the field.
But the guy I really liked was the Stone Crabs' first baseman, Patrick Leonard. Leonard does not show up on prospect lists, but he can rake. He hit his 11th homer of the season in the game and just looks like a hitter.
The same could be said of the Cardinals' first baseman, Luke Voit. He's a big guy at 6'3" with a good idea of the strike zone. He showed pretty good range at first and good scooping ability.
I also liked Charlie Tilson. He had two hits including a double and made a great diving catch in center. It looks like he is one to watch in that system. I liked Dante Rosenberg both as a catcher and a batter. I loved Edward Mejia's glove at shortstop--very acrobatic--but I hated his bat.
One other thing impressed both my son and I. He was a baseball lifer who coached first base for the Cardinals. His name is Roger LaFrancois. He always looked interested and jogged out to his position even though he has been doing this for decades and his players pay little attention to him. That's a love of baseball.
It was a great night in a great park and it was especially great watching it with my son and I hope we get to do it again together next year.
Posted by William J. Tasker at 5:32 PM No comments:

Thursday was a positive day for the Game Picks but things looked even rosier in the beginning. After the early games, the picks stood at 6-1. However, all three late games came up short. Josh Beckett out-dueled Adam Wainwright and it could have gone either way, just as I said in the picks. Mike Leake was better than Ryan Vogelsong and the Cubs took care of the Nationals in the gloaming.
Here are Friday's picks:
And the Game of the Day:
Yesterday: 6-4, June: 193-162, Games of the Day: 43-40, Season: 647-543
Posted by William J. Tasker at 9:02 AM No comments:

Swimming against the strikeout tide

Never in the history of Major League Baseball has the strikeout been as prevalent as it is in today's game. The rate has risen every year and 2014 stands to break another record as the average strikeout rate in baseball is 7.73 strikeouts per nine. Even so, there are a few throwbacks to a bygone era whose current strikeout rates would not have been league average unless they pitched way back in 1981.
There are currently six pitchers who have pitched at least 50 innings who have a strikeout per nine rate less than 5.0 per nine. They are: Paul Maholm (3.96), Nick Martinez (4.22), Kevin Correia and Chris Young (4.48), Bronson Arroyo (4.92) and Kyle Gibson (4.93). Two of those pitch for the Twins.
It gets worse for the Twins from there. There are eighteen pitchers who have logged twenty innings or more this season with less than five strikeouts per nine innings and five of them are Twins. And Matt Guerrier would be on the list too if he had two more innings pitched. Throw them strikes, boys, and let them hit the ball!
The K/9 rate might not actually be the best way to look at strikeouts and pitchers. There is also strikeout percentage, which is all about the percentage of strikeouts per plate appearance rather than by inning. It might be a truer picture.
There are 21 pitchers whose strikeout percentage is less than 15% and who have pitched at least 50 innings. There are 55 who have done the trick with 20 innings or more. Just to give you some perspective, 20.3% is the Major League average. So these guys really are swimming against the strikeout tide.
Only one pitcher is averaging less than 10% for a strikeout rate with 50 or more innings and that is/was Paul Maholm. If you go to twenty innings or more, there are four: Mike Pelfrey (8.4% [!]), LaTroy Hawkins--otherwise known as Methuselah--(9.8%), Scott Carroll and Maholm at 9.7%.
For those who are close to Maholm with more than 50 innings, there is Nick Martinez at 10.7% in 59+ innings whose home ballpark is in Texas--not a good combination. Kevin Correia comes in at 11.3% followed by Chris Young at 12.2% and then by Eric Stults at 12.5%. These guys are fighting the tide and only Chris Young is somewhat succeeding with his offerings.
Last year, there were only five qualified starters who finished with less than 15% for a strikeout rate. The bottom two were Jeremy Guthrie and Kevin Correia. So far this year there are twelve. I don't know if that means there are more exceptions to the rule this year than last or that injuries have forced teams to go with more pitchers who do not fit today's pitching mold.
What I do know is that ten years ago (2005) there were 42 qualifying pitchers that finished with a strikeout percentage of less than 15%. While to this point, twelve is more than the two from last year, we can easily see that this is a dying breed.
Posted by William J. Tasker at 10:13 AM No comments:

My son reads these posts faithfully and is down with me for a few days while I am in Florida. He likes to poke fun of me when things go wrong. For example, he wryly mentioned that I had called Tim Lincecum the worst pitcher on the Giants and the guy threw a no-hitter. I weakly replied that I had picked the guy to win and the worst pitcher on a very good rotation can still be pretty good. The Number One son wasn't buying it.
At least I had a good day, so he can't rag on me too bad (heh) today. But make no mistake, I can rag on him too. I took him to a crab place yesterday and he ordered blue crab, something he had never had before and he had no idea how to eat them and could not get any of the meat out. Ha! I stuck with the snow crab I know and had a great meal.
Thursday's picks:
And the Game of the Day:
Yesterday: 10-5, June: 187-158, Games of the Day: 42-40, Season: 641-539
Posted by William J. Tasker at 9:05 AM No comments:

How MLB.tv and stat signs turned me into a pessimist

I used to follow baseball with optimism, but lately, I am just one big negative Nelly. Why did it change? How did I become a pessimist?

Read all about it at It's About the Money, Stupid.
Posted by William J. Tasker at 4:11 PM 6 comments:

Email ThisBlogThis!Share to TwitterShare to FacebookShare to Pinterest
Labels: being a fan, MLB, Pessimism

Yesterday wasn't pretty. The Game of the Day was only off by nine runs. No big deal. In fact, the day started bad, but the picks rallied to a 6-6 tie only to have the last three games of the night come up wrong. That's baseball.
Something really strange did happen last night. Two games went deep into extra innings. When the dust cleared, both were settled in this picker's favor. That never, ever happens. So maybe a new trend started on a bad day. If so, I'll take it.
Wednesday's picks:
And the Game of the Day:
Yesterday: 6-9, June: 177-153, Games of the Day: 41-40, Season: 631-534
Posted by William J. Tasker at 9:51 AM No comments: