Aaron Judge, the New York Yankees' fan favorite slammed his 100th career home run last night in Seattle. Judge's 100th homer was hit some three years and eleven days after he hit his very first Major League homer at Yankee Stadium. The remarkable thing about the first and the 100th were how similarly they were hit.

See for yourself. This was Judge's first career homer, courtesy of MLB.com:

They look pretty darned similar, didn't they!? Both were hit to center and though they were hit in two different parks, both homers banged more than half way up the batter's eye. How similar were they beyond this eye test?

Aaron Judge's very first MLB homer on August 13, 2016, traveled 446 feet. Last night's homer was projected at 462 feet. That is within 16 feet of his first one. Masahiro Tanaka was the starter for both games: Judge's first and last night. Both Judge homers made the score, 2-0 in the Yankees' favor. The pitches Judge hit for his first and last homers were in similar quadrants and both were up in the strike zone. The following is from Brooks Baseball and shows the placement of both. The first one is the first career homer off of Matt Andriese and the second is the 100th homer: 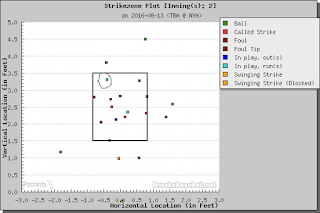 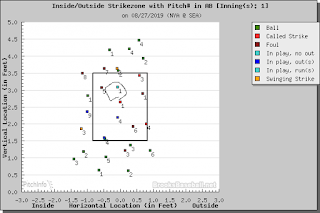 The one huge similarity with both homers is that they add to the Aaron Judge legend. For many of us, he is the reason we stay up late when the games are on the West Coast. He is the anticipation every time he comes to the plate. And when he hits one, he is the thrill that makes baseball so fun to watch.

It has been a fun ride watching Aaron Judge from his first game until now. Last night was a milestone. Hopefully, it will not be the last.
Posted by William J. Tasker at 2:32 PM No comments: