The Mets, my dad and Memorial Day

Memorial Day and my dad have always been combined for me. The day always brings him to mind more powerfully than any other day. Growing up in Bergenfield, New Jersey, the holiday always meant the big parade. It was a time for my dad to put on his uniform. And man did he look good in that thing. He stayed thin his entire life so it still fit. He was dashing and handsome. Usually, I did not get to see him march because I was marching myself with my PAL teammates. After the parade, we would all go to the VFW, which was like our second home and there would be a barbecue.

My dad was born in New York City on July 23, 1923. By 1930, the family had moved to Bergenfield and his dad worked in the public works department for the city for many years. Near the beginning of World War II, dad enlisted and somehow became a radio man in a bomber. The details are fuzzy as I was never able to learn much about it. But his bomber squadron flew many missions, first in Africa and then in Europe.

I cannot even imagine how stressful and scary that must have been. Those aircraft were not made for comfort. The enemy's sole mission is to shoot you down. The harrowing peril must have accompanied every flight. But my dad, like many other heroes of that conflict, did what he had to do and I have a display case with all his medals to prove it. He was our hero. And rightly so.

He was not around long enough for me to have asked him for more details. He was in a car accident when I was ten years old and died on March 11, 1966. His death was so long ago that it is a struggle to preserve what few memories I have of him. I cannot close my eyes and picture him. I cannot hear his voice. There were no VCRs or digital cameras back then. We had one tape recording of his voice and it was accidentally erased.

I remember that he loved his kids. My last memory of him was him chasing my brother and I around 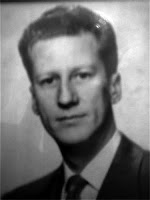 the house while we threw stuffed animals at each other. I remember him taking us places like the Statue of Liberty and to the Worlds Fair. I know he had blond or sandy hair and blue eyes, characteristics that none of us kids inherited.

And I know that he introduced me to baseball. There are two distinct memories of him and baseball at an early age. The first was an evening that I woke up in the middle of the night (or so it seemed). I must have slept with my head hanging down and it seemed all the blood in my body was in my head. Or maybe I was just stuffed up and did not know any better.

I walked from my bedroom down the short set of stairs in our split level house and heard the television on in the basement. My dad had transformed that basement from a cement bare bones to a really nice family area. He was handy that way. I never got to learn from him.

Anyway, I was really little at the time and walked down the stairs to the basement and Dad was sitting on a chair watching the Mets. That was his team. Like many folks from the area, he must have switched to the Mets after the Giants and Dodgers left town. I vaguely remembering sitting at his feet and watching the game with him.

And he took me to my first live ballgame. I have tried to find the exact game because the memory is always faulty when it comes to such things. Two things I distinctly remember was parking and that huge globe statue that I had first seen at the Worlds Fair. Shea Stadium was a beautiful blue color on the outside and was still fresh and new. I also remember that Bob Veale was the pitcher and since our seats were behind home plate, he was the most scary looking human I had ever seen.

Part of it, I am sure, was because I had not had a lot of experiences with African-Americans, but even so, Veale was huge and mean-looking. He was six foot, six inches and in that Pirate uniform, and it seemed like he threw the ball at 100 MPH. He probably did, who knows. He was quite good through the mid-1960s and had a nice career.

I also remember that the Mets won the game. The only game that makes sense then was the August 17, 1964 game at Shea when Veale lost, 5-0. To show you how faulty the memory is, I thought I remembered that Ed Kranepool hit a homer. Like everyone of that time period, Kranepool had become a hero of mine. He was handsome and dashing and just looked like a ballplayer. Kranepool had a hit in that game, but the real hitting star was left fielder, Charley Smith, who hit two homers.

I was introduced to Yankee Stadium during my PAL years from 1965 and later and became a Yankees fan. But my first game was a Mets game and it was with my dad.

My dad was not larger than life. He made his share of mistakes as a human being and things were difficult for us all in the two years before he died. Like most of us, he was flawed. And the one thing I remember the strongest when he died was that I could not cry. My uncle came over to tell us that he passed and told us it was okay sometimes to cry. But I could not.

In fact, I did not mourn at all after he died. Perhaps I never accepted it. We were not, as children, allowed to see him in the hospital or go to the funeral. So it was like it never happened. I imagined for years that he was still alive and had run away.

It was not until May 21, 1979 that the dam burst. That was the day my son was born and he would become the fourth straight male firstborn that would be a William. For some reason, becoming a father myself brought back the loss that I had encountered as a boy. I remember crying hysterically and privately for my dad in the days after my beautiful son was born.

Many of us are a product of both our environment and our genes. I carry some of his same flaws. I, like him, have made good money and lost it all. But I would like to think that I inherited some of his good qualities too. Very few people disliked my dad. He was popular and loved by my mom's Italian family. After he died, my little old Italian nana would tell me many times that my father was a good man. I would like to think the good outweighed the bad. That is all most of us can hope for in a life that has no blueprints.

His short life and early death have shaped much of my life. I wish I could remember more and hear his voice. I wish I could thank him for the good things and forgive him the bad. He would be 90 years old this year. I wish he were.

But I have his medals. They fill me with pride at what he did for his country. I have Memorial Days that connect me with him. And I have baseball. He passed on enough to celebrate. I wish it was more.
Posted by William J. Tasker at 10:33 AM

Very nice, my Dad also passed on when he was struck by a Car as he walked across the street exiting church. I miss him terrible. Though he wasn't a military man, but he was my hero. My father in my opinion made many mistakes also, he made a ton of money too. Sadly when he passed I didn't inherit not one penny, my father's other son received every cent. That's a story for another day,
I read your previews, opinion's everyday. In my opinion your a very good writer, as you can see I didn't spend much time in listening in school!!
Thanx again, Happy Memorial Day to you and your dad.
VR

Thank you, VR. I appreciate the comments.

Great post. We do get baseball from our fathers, by and large, and that's what makes it so special. That whole "Hey Dad, let's have a catch" thing is very real. Thanks for sharing your story.