Sixteen Best Ever Seasons By a Catcher

Catching talent is a bit like looking for lumber in a stack of sale-price boards. There might be a few good ones in there but the rest of them are a bit warped and full of knots. Nothing brought this home any closer than news that the Tampa Bay Rays have traded one mediocre catcher (John Jaso) and signed another (Jose Molina). The dearth of good catchers is why Joe Mauer was given his current contract and also why that contract would be worth considerably less to the Twins if Mauer were to change positions. Everyone can list off Hall of Fame catchers. There's Johnny Bench, Gary Carter, Mickey Cochran, Bill Dickey, Yogi Berra, Roy Campanella, Mike Piazza and yes, Ivan Rodriguez and Joe Mauer. Sites in the past have tried to list which of these catchers was the best ever. But what about greatest seasons ever? This post will attempt to bring you the best sixteen seasons ever by a major league catcher.
Why sixteen? Well...that arbitrary number was because Yogi had the sixteenth best season ever and if this post didn't go that far, he would have not made the list. We couldn't have that. So it's sixteen. How do you determine the best seasons ever? That's a bit arbitrary too. This post will use WAR. But which WAR? And that's a great question. Take 2009 for instance. Both baseball-reference.com AND Fangraphs gave Joe Mauer a 7.9 WAR that season. But the year before (2008), B-R gave the same Mauer a 8.7 WAR while Fangraphs gave him a 6.2. Wuh? So what this writer did was to seek out the best seasons adding up both the rWAR and the fWAR and dividing by two. If you think there is a better way to judge, feel free to comment or come up with your own list. The Fan would love to see it.
Some of these great seasons will surprise you. Sure, it is sprinkled with Hall of Fame catchers. But there were some one-hit wonders in there too. Some were outstanding for the offense the catcher generated that season. Others were a combination of great offense and great defense. WAR adds all that stuff up and gives us a number we can use. So here goes. Here are the best sixteen seasons by a catcher ever. Oh, wait. One more thing, a catcher had to catch at least 50 percent of his games played that season to qualify. Here we go.
There! That's the Fan's list of the sixteen greatest catching seasons ever. What do you think? Comments are always welcome. Below is the calculations used for this post with the added bonus to see who comes below these sixteen. 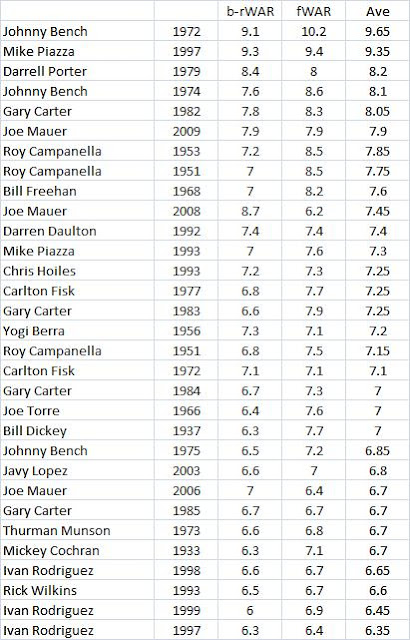