Anyone who has visited this site from time to time knows that this Fan grew up in New Jersey and fell in love with the New York Yankees. You also might know that team-crush began in the mid to late 1960s when the Yankees had fallen from grace and played for empty stands. Those teams couldn't hit although they pitched rather well. After Mantle retired, there simply wasn't an iconic batter for the team to root for. And then Bobby Murcer arrived on the scene in 1969.
Murcer's career was late to start because he had to serve two years in the military. But when he finally did break into the line up upon his return in 1969, he started a love affair for this Fan and for all of the New York tri-state area. He was an Oklahoman like Mickey Mantle. He was handsome. And he played center field. What was there not to love?
Murcer's first two years were promising. He didn't hit for a high average (just .259 and .251) but he walked a lot and hit for power. He hit 49 homers combined those first two seasons. Still, his OPS+ for those seasons were 119 and 116 respectively. But he became a superstar in 1971, his third full season. In 1971, Murcer batted .331 and led the league with a .427 on-base percentage. After striking out a hundred times in his first two seasons, he struck out only 60 times in 1971. He had 56 extra base hits and led the league in OPS at .969, good for a commanding 182 OPS+. He came in seventh in MVP voting and had the highest WAR of all position players in the AL that season. The Fan's man-crush deepened.
Murcer didn't have quite as good a season in 1972, but he actually finished with a higher WAR. His defense in center was better and he raised his homer total to over thirty for the first time in his career. He led the league in runs scored and total bases that season. It was clear that he wasn't going to be Mickey Mantle. But he was as good as Carlos Beltran early in his career.
Bobby Murcer's overall numbers were down in 1973, but he still hit over .300 and made the All Star team for the third straight year. He hit 22 homers and his OPS was good for a 134 OPS+. He was still one of the elite players in the American League. He became the first Yankee since Mickey Mantle to make $100,000 a year, a symbolic number in those archaic days. He was our star. He was our standard bearer. And then the dream ended. The Yankees announced that they were going to renovate Yankee Stadium and move to Shea Stadium for two seasons starting in the 1974 season.
Shea Stadium broke Bobby Murcer. The dimensions at Shea did not suit Murcer like Yankee Stadium did. Murcer's home run total fell to ten in 1974. He hit only two homers in Shea Stadium all season. Suddenly, Murcer had warning track power. His OPS fell to .710. After compiling 23.9 WAR the previous four seasons, he fell to only 1.1 in 1974. He wasn't even the center fielder anymore. Elliot Maddux took over that position in 1974 and Murcer moved to right. The writing was on the wall.
The Yankees were on the move during those years. George Steinbrenner had purchased the team and he was determined to build a winner. Murcer's production wasn't going to cut it with George and after the 1974 season, Murcer was traded to the San Francisco Giants for Bobby Bonds. Our hearts were completely broken. Bonds was a good player, but he wasn't our guy. Our guy went on to have four decent seasons for the Giants and the Cubs. His power somewhat returned and he hit 50 homers combined in 1976 and 1977, but it wasn't for us. He never made another All Star team. He never led the league in any category again.
Steinbrenner, as was his wont, brought Murcer back for a swan song in 1979. He was there for us after Thurman Munson died in a plane crash. He got us through those days. But he was a broken down, role player by then. He gave us some moments to smile and cheer. But his career that seem headed to glory before Shea Stadium fizzled and withered away. Shea Stadium killed our dream and cost us our hero.
There are some things in life you never get over. The fall of Bobby Murcer as a Yankee superstar and his eventual trade were two things that hurt all these years later. That's why this Fan can relate to the Mets losing Reyes and with the Cardinals if they should lose Pujols. It hurts, man. It really hurts. 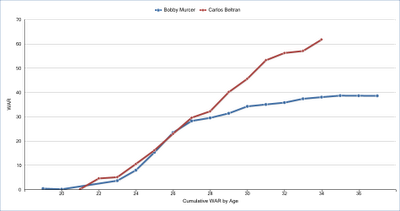 Great post. I'm a little younger than you, so those '73-'75 years are among my absolute first Yankees memories. I don't have the same indelible memory of Shea Stadium ruining Bobby Murcer, but a funny thing I just realized: when I think of the two years the Yankees played at Shea, I think of Murcer. I don't know why exactly, especially considering he was only there for one of those years. It's just one of those things, I guess.

I do feel your pain, having begun my Yankee fandom (grew up in Bobby Valentine's hometown of Stamford CT) in 1969 (and my buddies and I ordered our first Strat-O-Matic game the next year, based on that 1969 season). However, what you may not have considered is that Shea Stadium in 1974 actually worked to Bobby's advantage in all the slash numbers, suffering only in HR's, SF's and RBI, and the latter only barely (as somebody famous - don't remember who - once said, you can look it up!). In other words, Bobby made the necessary adjustments, and quickly, to be a productive hitter in an environment that did indeed sap his power. I think THAT'S notable.

During those early years of my Yankee fandom ('69-'71) another Yankee outfielder, Roy White, became my favorite player. Consistent BA, great OBP (though, if you'll recall, we paid absolutely no attention to that back then as even baseball insiders didn't), decent power and baserunning, and a solid defender in leftfield. Roy suffered a bit of an offensive correction in the '72 - '74 seasons (though he did lead the league in walks in 1972)but was back at it for the pennant winning seasons of 1975 and 1976.

My brother-in-law (who I did not know until '76 when I married) was also a Roy White fan. Thanks to that same unnamed Yankee marketing insider, he was invited to a pre-season dinner prior to the 2011 season at which any number of former Yankee players were feted. John had the opportunity to meet Roy and to tell him that Roy was his favorite Yankee of all-time. Roy was amazed and touched, having never been termed such by anyone he'd met before (alas, he'd never met me though I must say I've been on the Jeter bandwagon for that honor for years now).

Thanks, yet again, for the chance to reminisce!

Never liked Roy White. He always played with this imperious look on his face. It was a turn off. Murcer did adjust to Shea. He still drove in 92 runs. But he was worth much less overall with his play, hence the trade.

As a rightfielder, no doubt. As a centerfielder, I think that could have been debatable. Surprised that facial demeanor would number among your categories for liking/disliking any player. Can tell you, from second hand reports (that being my brother-in-law) that, despite his visage, a very nice man.

When you are a kid, there is no rationale to your fan likes and dislikes. It makes perfect sense that White is a nice man.

Ain't that the truth! At the ripe young age of 5, I actually thought Richard Nixon was better looking than JFK!