This writer would like to think that he is the most rational of all die-hard Derek Jeter fans. His strengths are well established in his statistics as well as his weaknesses. But there is a scale of sorts that weights the strengths and weaknesses quite well (albeit with some flaws). It's called wins above replacement or WAR. As long as a player is scoring in positive numbers in WAR, he is helping out his team (especially if you don't consider what a player is being paid). And Derek Jeter did have a positive number in the WAR category last year. But it was his smallest WAR of his career. This year, Jeter will strive to prove that last year was a blip and that he still has it in him to be one of the elite at his position. History is not on his side.

As mentioned in the last post, the Fan has fallen in love with War Graphs over at Fangraphs.com. What the Fan thought he would do was use War Graphs as a means of showing what Derek Jeter is up against. So the Fan used this wonderful feature to plot Jeter's career against a couple of other Hall of Fame shortstops: Luis Aparicio and Pee Wee Reese. Here's how the graph looks. Click on the graph to make it larger and then click the back arrow to get back to this post. 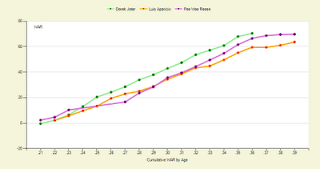 As the War Graph clearly shows, Aparicio and Reese both continued to climb in accumulative WAR just like Jeter has but hit the wall at the age Jeter is attempting to play. Both Aparicio and Reese flattened out in their careers in their 37th year. Aparicio did have one good last year, mostly as a utility player.
This next War Graph gives pretty much the same story with Jeter and two other Hall of Fame shortstops, Phil Rizzuto and Cal Ripken, Jr. Ripken, of course, played third in his later years. 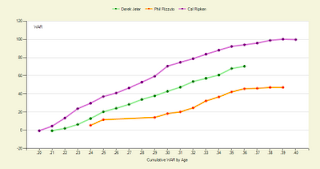 Phil Rizzuto stopped accumulating positive WAR after his 36th birthday. Ripken continued to climb for a year or two more but then he too flat-lined. Jeter is more the physical body type of Ripken than any of the other Hall of Famers we have pitted him against. So the best we can hope for here is that Jeter has another one or two positive years like Ripken did while staying in a position that Ripken was bumped out of by Mike Bordick.
Perhaps it would be instructive to include one more War Graph. This one pits Jeter against the career of Paul Molitor. While Molitor wasn't a shortstop, his career of accumulating WAR is markedly similar to Jeter's. Take a look: 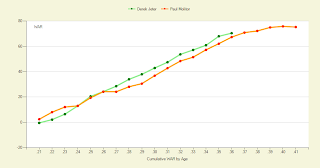 This War Graph shows that Molitor had a very similar drop in production as Jeter did last year, but it was at an age a year later than Jeter. Molitor had one more positive season and then flat-lined.
The bottom line for these graphs is that Derek Jeter is fighting history. If he follows Ripken and Molitor's career path, he might have one or two more productive years. But that is the best we can hope for. Anything else would defy history. The good news is that if Jeter can defy what these charts are telling us, then he will write a new chapter in his storied career.
Posted by William J. Tasker at 11:55 AM