Everyone is having fun with War Graphs, one of the best features of the Fangraphs.com site. This one shows how nearly identical the careers are of Hank Aaron, Alex Rodriguez and Albert Pujols really are. Take a look at the chart below. If it's too small for you to see, click on it and it will get bigger. 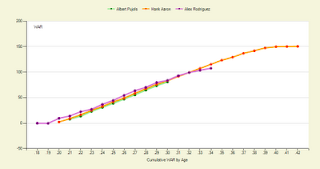 This Fan finds that graph amazing. Note how Alex Rodriguez is just above Hank until the last two years, which shows the effects of the hip injury A-Rod suffered. A-Rod appears to be much healthier this spring and could jump back on Aaron's pace this year with a big year. Pujols is on an almost identical path for his first ten years as Aaron.
Let's do the same thing, but remove Aaron and add it Barry Bonds. Note that Bonds and A-Rod are nearly identical at A-Rod's current age. But then Bonds had that late career boom which you can debate some other time...perhaps after the trial is over. Pujols is right there with them. 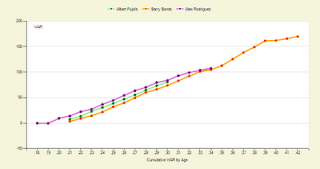 That's pretty remarkable stuff. Albert Pujols seems to be marching on at a steady pace just like A-Rod and Aaron. Considering he plays first base and gets a positional penalty from that position, Pujols clearly is an astounding player and we should certainly enjoy it while it lasts.
Posted by William J. Tasker at 10:15 PM