The game on Sunday between the Cincinnati Reds and Miami Marlins was exciting. The seesaw game went back and forth as the lead changed hands a couple of times. Jay Bruce hit two homers including the game tying shot off of Heath Bell to tie the game in the ninth. The 37 year old Scott Rolen gave the Reds the victory with a well-placed smash down the third base line that Hanley Ramirez had to eat while the winning run scored. The hometown fans in Cincinnati went wild. A trip to MLB.com to view the highlights saw the winning hit, both of Bruce's homers, Brandon Phillips' 1,000th hit, a few of the Marlins' offensive highlights and that was it. There were no Aroldis Chapman highlights. Ho hum. All he did was pitch two innings to luck into the win. Nothing to see there.

From there it was to Yahoo sports for the game recap. Aroldis Chapman got one line. One line. The line: "Left-hander Aroldis Chapman (1-0) pitched two shutout innings of relief." Nothing special there. Move along. We have other things to talk about. But was there anything more important to this victory than the two innings Chapman pitched? Not in this mind, there wasn't. Chapman shut the door spectacularly and allowed the Reds the chance to come back in the game. His innings were pivotal.

Chapman has come a long way since his struggles of a year ago. 2011 was a year of emotional upheaval for the Cuban pitcher we've been told. Apparently that upheaval cost him his ability to pitch in the strike zone. Chapman walked 41 batters in 50 innings of work in 2011. That is a rate of 7.4 walks per nine innings. Mixed in those wild results were records of throwing the ball 105 MPH. Nobody had recorded a pitch going that fast before. But Chapman's 2011 season, much like the Reds' 2011 season was a lost one. He did a short stint in the minors and came back more effective though.

There was talk this spring of moving Chapman into the starting rotation. In fact, four of his five spring appearances during Spring Training were starts. The results were encouraging: 17 innings, a 2.12 ERA with 18 strikeouts and just two walks and a WHIP of 1.12. But those plans were scrapped because the Reds, in their infinite wisdom felt that Bronson Arroyo and Homer Bailey were better fits in the rotation. Well, alrighty then.

And thus, the Reds put Chapman in the bullpen. Sunday marked his first appearance. It was spectacular whether or not anyone noticed. He threw 27 pitches and 21 of them were strikes. His average fastball was 98 MPH with a vertical break of 10.66. 10.66! His fastest pitch was 100.3 MPH. The slacker. Only two of his pitches were more than 100 MPH. Perhaps that doesn't excite anyone. Chapman threw two innings and his line was one hit, no walks and three strikeouts. Would the Reds have had a chance in this game without that? Doubtful.

Just to give you a pictorial idea of how effective Chapman was, here is his game's strikezone plot via Brooks Baseball. Talk about pounding the strike zone! Chapman was a beast on Sunday for the Reds. Too bad nobody noticed. 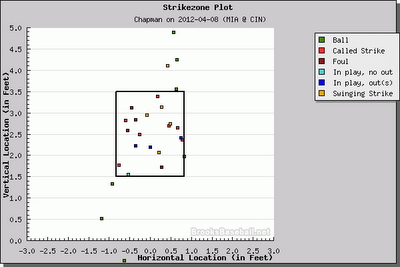 We are noticing in Cincinnati! :)

It might be the right call, for now, having him in the bullpen, at least until either Arroyo or Bailey pitches himself out of a rotation spot.
Closers get all the credit, but any reliever who pitches like this deserves to be noticed.
Bill