Leadoff batters, where are you?

Everybody has their own idea of what a leadoff batter should be. Some think it should be the fast guy who can steal bases. Others like the speed / power combination. Some think that the leadoff batter should be the guy with the best on-base percentage. Some, writing in the past, focus on OPS. I tend to favor one or two of the latter. But if I had to commit myself, my preference would be the guy with the best on-base percentage who is not necessarily the elite hitter on the team.

The elite hitter usually bats third or fourth and the long-standing theory is that the leadoff guy gets on base and the big guys get him home. If they are also speed guys, that's great as long a they can be successful stealing 80% of the time. If they have some pop, that's also great. But the bottom line, for me, is that the first guy in the lineup can get on base at least 35% of the time.

I compiled the league spit total for all of the Major Leagues for the past fifty years. And except for one golden age we will talk about in a minute, the collective of MLB leadoff batters have not been overly more successful of getting on base better than the collective of MLB batters as a whole. See the chart below: 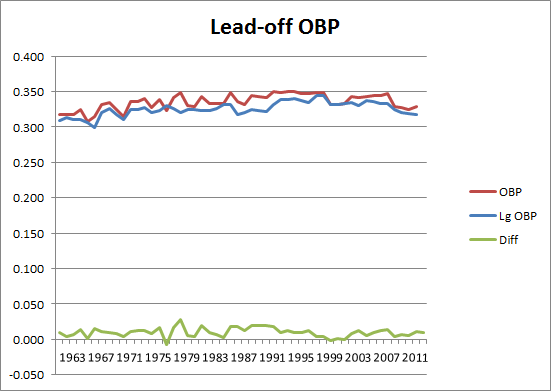 The last four years is the first four-year stretch since the early to mid-1960s where the collective leadoff batters did not average a .330 on-base percentage. The downturn follows the overall downturn in offense over the last four years.

But as you can also see, the current offense is similar to the offense of the mid-1980s but that was also the dawn of a golden age of leadoff batters that lasted until 1995 or so. That was the period of Rickey Henderson, Wade Boggs, Lenny Dykstra, Tim Raines, Brett Butler and even Bip Roberts. All those guys were terrific at getting on base despite whatever the league averages were and dragged the entire category up with them.

The average year for a leadoff batter resulted in an on-base percentage of about 10 points higher than all players as a whole. During those glory years, it often rose as high as 18 points.

Why is that significant? Some writers have suggested that a good leadoff batter can add as much as 15 runs to his team. Generally, leadoff batters have a thousand plate appearances league-wide more than the number three hitter on the team, or about 33 more plate appearances for each of the thirty teams. 15 runs is a little more than a win. A win is worth $5 to $6 million. A win could also make a difference in the standings.

I have found in my research that unless the collective of leadoff batters have an on-base percentage of .330 or higher, they will not score more collective runs than the number three batters in the league. And that is for a thousand more plate appearances! So, yes, it does make a difference.

As I stated, the last four years, the collective leadoff batters (by the way, I am using baseball-reference.com's league splits) have averaged less than a .330 on-base percentage. This past season (2013), only six leadoff batters--or one-fifth of all teams--had a leadoff guy whose on-base percentage was over .350: Shin-Soo Choo, Matt Carpenter, Norichika Aoki, Jacoby Ellsbury, Ian Kinsler and Jose Reyes.

Is it any surprise that two of those guys were two of the highest paid free agents this off season and another, Kinsler, was part of one of the biggest trades?

Perhaps the leadoff batter has become a market inefficiency. Or perhaps the trend simply indicates a pitcher dominated era. There also might be a reflection of the acceptance of the strikeout as just another out somewhere in the mix too. Whatever the case, the leadoff batter is not what it used to be even as recently as 2009.