The first part of the problem for the Dodgers was the long-held belief by major league managers that a five run lead is safe in major league baseball. With the emphasis on saves and holds and close-game bullpen management, managers often find a way to get less than stellar relievers in the game to start the last inning when their teams are "comfortably" ahead. Don Mattingly was no different. But the Fan is getting ahead of himself just a bit. Let's start at the beginning.
The Diamondbacks naturally want to win as they fight for second seed in the playoffs, but unlike the Brewers, do not want to use one of their better pitchers to accomplish that goal. It was the perfect time to start Jarrod Parker. Parker was drafted in the first round by the Diamondbacks back in 2007. Just 22 years old, Parker had a successful, if somewhat disappointing season in Double A this season. Baseball America rated Parker the 33rd best prospect in baseball this past off season. Parker did his part by pitching five and two-thirds innings of four hit ball with one walk and one strikeout. Nice. He also picked up his first major league hit. And lest that last fact be a surprise, Parker has a .271 lifetime BA in the minors.
So Parker matched Hiroki Kuroda, who did what he usually does: give up no runs and not get a win. With both starters out of the game, both teams scored a run in the seventh. Dee Gordon drove in a run in the top of the inning for the Dodgers and then Lyle Overbay doubled in a run for the Diamondbacks in the bottom of the frame. Overbay is a nice player on the bench for the D-Backs. In a totally meaningless statistic, the D-Backs are 13-4 in games Overbay plays.
And so the game stood at 1-1 through the regular duration of the game and we get to the top of the tenth inning. The Diamondbacks brought in Micah Owings, owner of this writer's heart as a man-crush. Except he got crushed. On top of giving up four hits and a walk in the frame, Owings also made a fielding gaffe that cost another base runner. Chris Young also made a fielding boondoggle and by the time the inning was over, Owings had given up five runs, four of them earned. Game over right?
Except Mattingly fell into that dreaded manager malady of the safe relief appearance. Blake Hawksworth is Mattingly's fifth best reliever. And he showed why (although not all of it was his fault). Hawksworth actually retired the first two batters on routine ground outs. But then Cole Gillespie singled (his first hit of the season). Miguel Montero singled and Gillespie went to third. Chris Young walked. John McDonald pinch hit for Owings (Owings might be the better hitter of the two) and hit a hard grounder to third. Aaron Miles booted it and Gillespie scored. That could have been the third out.
And as happens so often in these "safe" relief appearances, Mattingly had to go to his closer anyway and he had to bring in Javy Guerra. Closers are strange people anyway and it's always better to start an inning with them than to bring them into tough situations. But Guerra needed to get just one out. It never came. He first walked Aaron Hill to force in a run. And then this happened. It was cute how Roberts mimicked his manager's famous home run trot in the World Series.
And thus the improbable happened. But why shouldn't it for the Diamondbacks? The Dodgers found a way to lose the game and the D-Backs found a way to win it. As for the Fan's man-crush, Micah Owings ended up with the vulture win and finishes the season, 8-0.  In a visual of how loony this game was, the Fan leaves you with the win probability graph of the game thanks to the good folks at Fangraphs.com. It sure looks like a roller coaster. 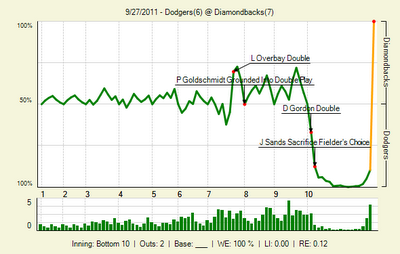 I loved Parker in this game. Only allowed 4 hits and one was a bunt hit and another a "bad hop" hit. He also hit an opposite field double.