Johan Santana the next Mike Hampton?

Comparing Johan Santana to Mike Hampton sounds rather stupid at first glance. First of all, Mike Hampton at his best was never as good as Johan Santana was at his best. But Hampton was pretty darn good in his hay days. Both were rather slight, left-handed pitchers. Hampton was 5'10, 185. Santana is 6'0, 200. Both received huge contracts after their great years and both ran into serious health problems in their early 30's which made their contracts onerous. Hampton would have a few cameos after his age 32 season. Johan Santana, at the age of 33, looks very much in doubt as being an effective pitcher moving forward.

Sure, Johan Santana threw a no-hitter this season...sort of. The record books show he threw one. We can at least say that. But since that game, Santana has a 7.98 ERA and looks terrible. And yet everyone insists Santana is healthy. As the linked article from the great Aaron Gleeman points out, does it make any difference if he is hurt or not? The fact is, Santana is not close to being an effective pitcher right now. Watching a few of the highlights from his outing yesterday, his pitches looked like beach balls floating up to the plate.

You would not expect Santana's velocity to be as strong as it was during his great years. But how far it has fallen is striking. Look at these three charts from Fangraphs.com. The first is his fastball, the second, the change up and the third, his slider: 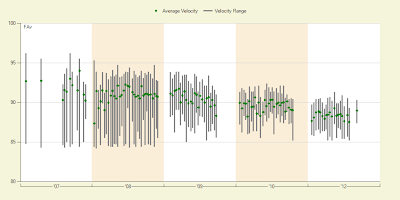 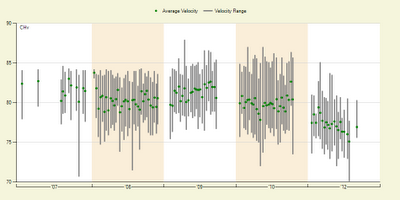 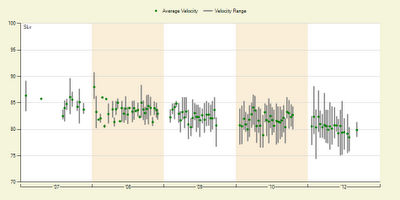 Sadly, Johan Santana's stuff is no longer good enough to consistently get major league hitters out. And it did not really start this season. According to Santana's Fangraphs page, the lefty maintained some fastball value up through the 2010 season when it was worth 21.9 runs above average. This year, his fastball has a negative value. But Santana is known for his change up. And it is a myth that the change up was still one of the best in the majors after 2008.

In 2008, his first season with the Mets, Santana's change up was his best pitch with a value of 22.9 runs. But that value disappeared starting starting in 2009 when it was worth only 1.8 runs. It was worth 4.8 runs in 2010. It is clear that the change up was gone as one of the best weapons in baseball by 2009. And his slider has not been an effective pitch since 2006.

It would be great to be proven wrong, but the prognosis for Johan Santana moving forward is not promising. He is making $25 million this year and will make $25 million again next year. It will cost the Mets $5.5 million to buy him out in 2014. Essentially, the Mets are on the hook for $55 million for a fallen Johan Santana. That fact makes his contract with the Mets look a lot like Mike Hampton's did for the Braves and Barry Zito's for the Giants. Such a boondoggle for the Mets has gone under-reported.

And while the money is an issue, there is also sadness that one of the brightest stars of the mid-2000s has gone dim. It may be his health. Or it may simply be that his stuff is gone. Whatever the case, Johan Santana looks very easy to hit and those stunning days of his past seem gone for good.
Posted by William J. Tasker at 12:09 PM

Methinks the death knell sounds too early and too loudly. Granted Santana's been rocked the last four times out (and probably too much has been made of his 134 pitch - 26 more than any other start - quasi no hitter). While there's no way that Santana is worth $25 million per year, your 4 start sample size is far too small to draw the conclusions you have. Instead all indications suggest that if the Mets have the fortitude to limit Johan to 100 pitches or so he can be an effective starter. Skipping a start might be a better bet than a wringing of the hands.