A simple NLCS at bat gets complicated

Don Mattingly called it the key of the game. The TBS broadcast team said the same thing. Other news stories called it as such. It was the third inning and Matt Carpenter came to the plate to face Clayton Kershaw with a zero to zero score and one out. To that point, Kershaw had thrown 38 pitches to get the first seven outs. By the time Carpenter hit his double, that count was up to 49. Carpenter would score almost immediately on a Carlos Beltran single. That was the only run the Cardinals needed. The simple explanation would be that Carpenter had a great at bat and won the battle. The opposite would be that Kershaw lost that battle. But things are never that simple. In that single at bat, Carpenter did not just win a battle that Kershaw lost. It gets so much more complicated than that.

The first paragraph presented the traditionalist view of the at bat. Carpenter and Kershaw battled and Carpenter won. There is another school of thinking where the pitcher only has three things in his control: the walk, the strikeout and the home run. Therefore, in this also simple explanation, Kershaw did his job and Carpenter did his job and a batted ball just happened to fall in play. Again, that is too simple an answer. The umpire also affects balls and strikes, the catcher's ability to "frame" the pitch just off the corner and the batter's patience and strike zone awareness also play a part.

There is also another factor we haven't discussed and that is pitch selection. Ultimately, the final say on the pitch to throw is the pitcher's, but the catcher and often times the pitching or dugout coach or manager also have a say on what is thrown.

So as you can see, we have already ratcheted up the complication factor beyond the simple happenings that show up in the box score concerning when Matt Carpenter faced Clayton Kershaw in the third inning.

Let's look at the pitch sequence and also my imperfect recollection of the at bat I watched on the television set. Fortunately, sites like Brooksbaseball.net can help. Here is that site's charts of the proceedings: 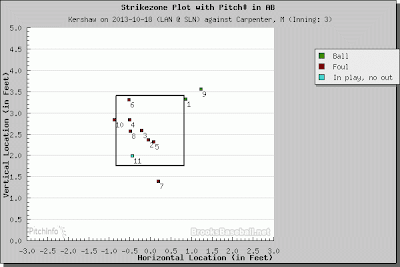 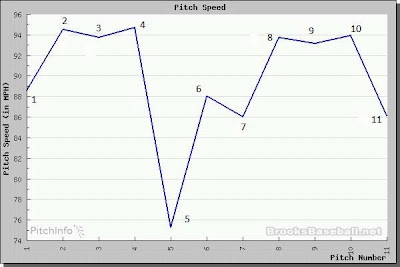 I added the pitch sequence numbers to the bottom chart. Just to help us out here, I will type out each pitch with the results as best I remember them:
That is how the at bat went. Kershaw made some great pitches that Carpenter was great to foul off. Kershaw made some fat pitches that Carpenter also fouled.  The last pitch was ill-advised. I have problems with the pitch selection because Carpenter was behind on a lot of the fastballs. There was only one he seemed to time well. The slower slider helped Carpenter. It was also thrown in a bad location, down and middle in, just where lefty batters love it. Carpenter did and laced it. A curve might have had a greater surprise factor.

A curve might have also been a better call with the ninth pitch while the count was still 1-2. But I think the curve was taken out of the equation because Carpenter reacted well to the first one and hit it well, just missing a double. But part of that equation was a bad location and another curve could have been thrown to a better result.

Otherwise than that, Kershaw and his catcher, A.J. Ellis, could have stayed with fastballs as Carpenter had shown no ability to put good wood on those.

So, you see, a lot happened in that at bat. Kershaw challenged Carpenter in the strike zone. Carpenter could not square up the fastballs. Two of the three sliders were thrown in bad locations with the final one being hammered. The one curve was in a bad location and then abandoned. This was no simple eleven pitches. Kershaw did not get the call on the first pitch, thus giving himself less room with a ball. It was complicated. And yes, I agree that the result of that confrontation was the single biggest factor in why the rest of Kershaw's day did not go very well.
Posted by William J. Tasker at 12:06 PM