One tweet last night seemed to say it all when it came to the Cardinals' victory over the Boston Red Sox last night in Game Two of the World Series:

The "old guy" pitching for the Cards today - Trevor Rosenthal - coming on for save chance. He turned 23 in May.
— Kevin Wheeler (@KMOXWheeler) October 25, 2013

That "old guy" was simply amazing...again.


I find Trevor Rosenthal to be thrilling to watch. There are two great closers in this series. Koji Uehara has also been amazing this season. But he is a different kind of closer. If you look closely at Uehara's statistics, he relies on deception to get the job done. He enticed batters to swing at 43% of his pitches outside the strike zone and throws only 50% of his pitches in the zone.

This means that if a team could set its mind, that team could take a bunch of pitches and make Uehara throw strikes. While that is very hard to do as my bud, Ben Dobbs, points out, it is still doable. It was such a strategy the Red Sox employed to beat Fernando Rodney earlier in the post season.

But no such strategy can beat Trevor Rosenthal. All he does is throw lethal gas that is at times untouchable. He threw eleven pitches and struck out the side...again. He threw two balls and one of them was borderline. The other ball missed by just a couple of inches. His pitches ranged from 96.1 miles per hour to 99.4. He averaged 98. Just look at this pitch chart from Brooksbaseball.net: 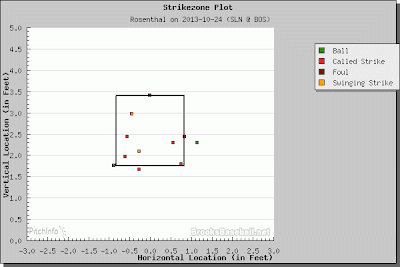 Do you see anything in the middle of the plate? Nope. The Red Sox tried to wait him out like they do with most pitchers. That was a waste of time with Rosenthal. Of the nine strikes he recorded, only three were swung at. None of those swings connected.

That chart is amazing. How many pitchers can throw that hard and yet still go in and out in the strike zone and not be touched? And the in and out do not appear to be an accident. Let's look at each batter: 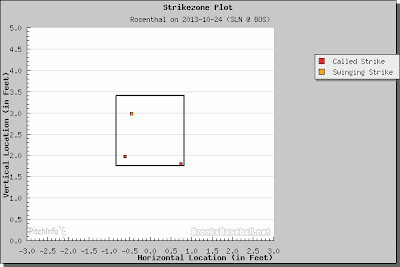 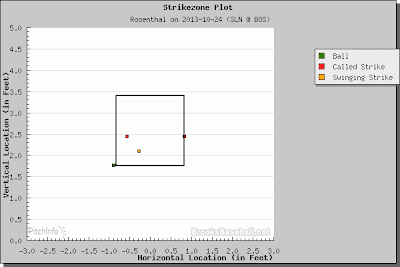 The Red Sox had their hands full last night. Michael Wacha threw 65 fastballs with a average of 93.7 and a tops of 96.8 MPH. Then they saw 21 fastballs from Carlos Martinez that averaged 96.5 and a tops of 98.6. And Martinez was brilliant too, no doubt about that.

But it is Trevor Rosenthal that I cannot wait to see. My man-crush is full blown. I love this guy.