Memories of Shea and Yankee Stadiums 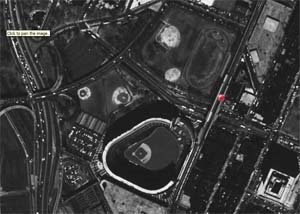 It's hard to believe that in one year, both New York landmark stadiums will be replaced, and in Shea's case, demolished. The Fan spent many happy days at both places and they will be sorely missed.


The first live baseball game the Fan ever went to was at Shea at the tender age of eight. The father who took the little Fan would be dead of an auto accident just two years later. As such, it's a special memory even though the details may be sketchy.


It is somewhat clear that the Mets played the Pirates and Bob Veale pitched for the Pittsburgh club and it can't be remembered who the Met's pitcher was. Dad had seats right behind home plate and everything was right there. Veale was rather menacing looking and intimidating to a little kid behind the backstop. The batter must have been even more scared. The Mets won the game with an Ed Kranepool homer.


To a little kid who barely remembered the World's Fair, near where the present Shea grounds stood, two things are remembered from that great event. The first was a General Electric exhibit about the future and the gadgets that would be available by the time we were grown up. Wonder how many of those came to pass? The second was the giant sphere of the world that still stands near Shea. That sphere is featured in the movie, "Men in Black." 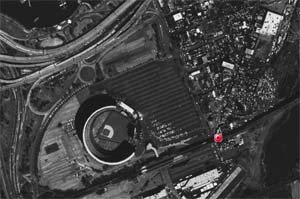 Shea was a pretty little thing of a stadium to a kid. It was perfectly round and had this pastel blue color that was very appealing and attractive to the eye. The scoreboard was enormous in right field and there was a lot of space behind the fence there. There was also a lot of space before the fence. Bobby Murcer's Yankee career ended on those warning tracks. That memory of going to Shea with Dad will be remembered always. But the Fan didn't get back to Shea until a decade later.


Growing up in New Jersey, the Fan was as rabid a Yankee fanatic as can be humanly possible. Please remember that this was the dark years when nobody went to Yankee Stadium and the team was terrible. We're talking about the years from 1966 to 1974. You had to be a Fan to like those teams with Horace Clarke, Roy White, Mike Kekich, Fritz Peterson, Mel Stottlemyer, Steve Hamilton, Dooley Womack, Thad Tillotson, Gene Michael and the rest of the gang. It may have been the worst collection of hitters in the history of baseball.


Being as bad as they were, Yankee seats were easy to obtain. And relative to today, they were cheap. After Dad died, the Fan's mom had to work full time and that often included weekends. She "babysat" the Fan and his brother by giving them five dollars each and putting them on the bus headed to New York. Imagine now that the Fan was all of eleven and little brother was nine. If a mom were to do that nowadays, she would be arrested for negligence. The Fan thinks Mom was the very coolest on earth.


There are no words to describe Yankee Stadium, especially the old and original version. It was simply majestic. Unless, of course, your seat was behind one of the thousands of pillars that held each deck up. But those only came into play one day a year when we weren't in the upper bleachers and not down by the dugout, and that was Bat Day.


Bat Day was an annual event when the Yankees would give out a Louisville Slugger to the first 20,000 kids who came to the Stadium. That day was always packed to the rafters. Three or four times a game, all the kids would raise their bats in the air and there was a sea of them everywhere you looked. And when the Yankees were having a rally (which was rare in those days), the kids would pound their bats on the floor making a thundering echo all through the stadium.


The second most awesome event was double-headers when you could watch two games for the price of one. Of course, you needed an extra dollar or two for soda when that happened. We always got there early enough to watch the team play pepper and take batting practice. We loved to watch the pitchers and outfielders shag the flies in the outfield. And we always had our gloves in case of a foul ball, but it was never to be.


One real early memory was a trip to Yankee Stadium given to us by the Police Athletic League. The coach of the Fan's team took the entire team on a bus. The Fan asked if little brother could come along. Since little brother was also our team mascot, he was allowed. But the Fan was given a stern warning to make sure the little guy didn't get lost.


Well, you guessed it. The game ends and the team is filing out to the bus. The coach makes the count and one is missing: little brother. The Fan is given a stern look and sent after him. After looking everywhere, little brother is finally found having a nice conversation with a policeman. He just decided to make a new friend. Great!


Many memories of Yankee Stadium are so relished all these years later:

They were all magical and humbling and thrilling memories. For a lower, middle class kid, the Fan was very privileged.


Another memory just popped up...this one of Shea. The Yankees were exiled there for a couple of years when Yankee Stadium was being rebuilt (and no, the improvements weren't an improvement on the original). The Fan is now seventeen and had a best friend named, Tom Cairoli, who would go on to be an accountant. He was a great guy and a few years older. He had an early mustang and it was a beautiful convertible with plush seats and even an eight track player!


The Orioles were in town for a double-header and the first game got in with no problem. After the first game ended, the skies opened up and it was just a deluge. It poured! In no time at all the field was flooded and the second game was called. Well the entire stadium had to empty at the same time because of the announcement. By the time we got outside Shea, it had stopped raining. But we were stuck in a sea of humanity on the wide sidewalk leading to the parking lot.


What looked like puddles on the sides of the sidewalk had no traffic at all. So the Fan pulled his friend's arm and said, "Let's go this way." We stepped off the sidewalk and the puddles ended up being oceans and we sank up to our thighs. Mr. Cairoli wasn't amused and gave his friend a look to kill.


We finally made it to his car and he was upset about having to sit on those custom seat covers with our wet pants, but it couldn't be helped. We started driving and came to discover that the major bridge we had to go over was closed (don't know if by rain or what). So we were diverted through one of the, umm...scarier parts of New York. We stopped at a stop light and if you can remember, even the Fords that were automatic had the shifter on the floor in between the seats.


While Mr. Cairoli was waiting for the light to turn green, the Fan put the car in neutral. The light turns green and Mr. Cairoli hits the gas and the engine revs but goes nowhere. By now, due to our surroundings, Mr. Cairoli is starting to have a panic attack. "Oh no! Not here! I can't break down here!!"


After suppressing a laugh for five seconds, the Fan told him to put the car in gear. For the second time in an hour, the Fan got a look that could kill.


There is always a saying that says you can never go home again. At the Fan's age, he can state for certain that this is true. The things of our youth are gone and replaced by condos. This is the case more literally as a big part of our childhood, Yankee and Shea Stadiums are history and new ball parks will take their place. But though you can't go home again, memories are ours and no one can take them away. Those memories provided by those two wonderful, but very different parks will be treasured always.


P.S. Those pictures are from Microsoft's Terranova satellite images. The Fan hopes they don't mind.
Posted by William J. Tasker at 2:45 AM

A heartfelt post and a nice stroll down memory lane. ESPN Classic was replaying the '86 World Series the other day. I didn't know a fan parachuted into Shea during one of the games. Pretty nuts.