Debates are fun and a good exercise in using the thought process to come to some sort of logical conclusion. The problem is that logic rarely enters into debates. The human animal is a highly emotional one and loyalties and biases almost always enter the debate process. This writer wishes he could have been around to hear the debates concerning Willie, Mickey and the Duke back in the fifties. The Robinson Cano - Dustin Pedroia debate must be quite similar. But there is a difference with this debate. Statistics.
Sure, they had statistics back in the 1950s. But few paid attention beyond batting average, runs batted in and homers. No Topps baseball card listed fielding stats or base running skills. Today we have logical and rational analysts giving us more dope than we've ever had before. That doesn't mean that fans of the Red Sox won't forever hold their "Pedey" in higher esteem than "Robby" and vice-versa. But now we can look at those emotional debates and try to make them logical.
Obviously this post is not going to have any conversation about second basemen and leave out the fact that other teams have great second basemen too. There's Chase Utley, Ian Kinsler, Ben Zobrist, Howie Kendricks, Brandon Phillips and others. Chase Utley leads all second basemen in fWAR since 2005. To set the record straight, though, Ben Zobrist leads all second basemen in fWAR the last three years followed closely by Chase Utley. Cano and Pedroia are tied for third. But this post is about the debate of the rival Red Sox and Yankees, and two of the best players on either team happen to play second base.
The two players on the second base side of the biggest rivalry in baseball are tied in fWAR for the last three years. But there is a catch to even that statement. Pedroia missed most of last year to injury giving him 88 fewer games played than Cano. Pedroia, of course was the MVP in 2008, so why didn't this Fan go back four years instead of three or even five years?. Good question without a good answer. See, you're getting the hang of this debate thing.
In case you want to go back all the way, here are the War Graphs for the two players courtesy of Fangraphs: 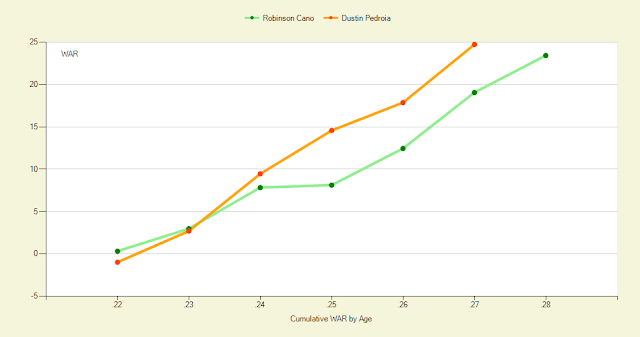 It's highly convenient that both players began their careers at the age of 22. As you can see on the chart, their first three years were nearly identical with a slight edge to Pedroia. Cano had a really bad year in his fourth year as the chart shows and he compiled nearly no WAR during that season. Since then, both players have solidly padded their WAR to the point that at this point in their careers, their accumulated value is still nearly identical. Pedroia has accumulated 24.7 WAR compared to Cano's 23.4. That's pretty darn close. Here are some career comparisons:
Pedroia is much more patient at the plate and strikes out less. Cano has more power and puts slightly more balls in play. To say they are pretty even at the plate would be fair. Cano is rated a better base runner with five runs above average for his career and Pedroia slightly in the negative column for that statistic. From a different perspective, baseball-reference.com gives Cano a 24.9 O-WAR for his career compared to 19.5 for Pedroia. That site values Cano's offense higher.
The real separator for these two players is defense. For their careers, Fangraphs gives Pedroia a positive 38.4 runs above average for defense for his career. Cano, on the other hand, is massacred in the category with a negative 41.9 runs below average. That is a defensive difference of 80.3 runs! Baseball-reference.com is much kinder to Cano on defense and the two players are closer in that category for their careers there.
But there is a strange sort of thing going on in the defensive numbers of the two players. Let's look at this year. Pedroia has made only four errors and Cano has made eight. But we know by now that fielding percentage tells us very little. Some of the other numbers leave this writer confused. For example, Cano has played one more game at second this season than Pedroia. Cano (according to B-R) leads all second basemen this season in putouts and assists. Cano also leads all second basemen in Range Factor 9 and Range Factor G. Cano has been a part of 78 double plays compared to Pedroia's 66. According to Fangraphs, Cano has made 43 plays outside his zone compared to Pedroia's 42. And yet, Pedroia is rated at the very top of fielding metrics for Fangraphs while that same site lists Cano as the second worse fielding full-time second baseman in baseball! This Fan doesn't quite get it (as has been stated many times before).
The value of these two players is so very close that it seems difficult to call. Both add different elements to their teams. Both are key performers. And both are similar in value statistically. It's a debate that is bound to rage for quite a few years to come. Dustin Pedroia or Robinson Cano? Which would you rather have?
Posted by William J. Tasker at 9:55 AM

I would take Cano based on his RBI and HR. Considering he is currently only batting fifth in the line up. In years to come as the future 3rd or 4th batter his numbers will only get better. If I need someone to start a rally or prolong an inning, I would go with Pedroia. I would however, want Cano to drive in that run. I liked the Jeter, Nomar and Tejeda debate better