The Red Sox and Orioles played two games on Monday and they were uglier than Camilla Parker Bowles. Well...that wasn't very nice. Oh well. Perhaps Camilla is more attractive. The pitching was terrible, the fielding worse and even the umpires couldn't avoid a costly gaffe. The two games ended with a split for day which is sort of a victory for the Red Sox these days. Even so, the loss in the first game moved the Red Sox six games back in the loss column from the Yankees with ten games to play. The split kept the Red Sox two games ahead of the Bay Rays for the wild card, but the Rays are only one back in the loss column.
The Red Sox were forced to give Kyle Weiland another start and again, it wasn't pretty. Weiland gave up three homers to the Orioles and five earned runs in just four and two-thirds innings of work. Shoddy defense behind him didn't help as one of his six runs allowed wasn't earned due to a Darnell McDonald error. But it wasn't as if the Red Sox didn't have their chances.
The real story of this loss was two-fold. First, the Red Sox got on base nineteen times in the game but could only score five runs. They hit into three double-plays which certainly didn't help. They had plenty of chances to bury Jeremy Guthrie but couldn't put him away. Guthrie also got a break from the umpires. David Ortiz smashed a liner to Pesky's Pole in right at Fenway and replays (duh MLB) clearly showed the ball hit fair. But the first base umpire ruled it foul and after the umpires huddled up, the call stood. In the same amount of time it took them to have that conversation, they could have looked at a replay and got the call correctly. But we all know that MLB doesn't have an adequate replay policy.
John Lackey started the second game. The pitcher was staked to several leads but couldn't hold down the Orioles. Lackey has become the most hated guy in Boston sports. If you think Yankee fans hate A.J. Burnett, that's chicken feed compared the dark thoughts Red Sox Nation has for its free agent pitcher. The Red Sox gave Lackey eleven runs to play with and Lackey still couldn't stay around long enough for the win. His final line was four and a third innings yielding eleven hits, eight earned runs with two walks and three strikeouts. His ERA now sits at 6.49.
The Red Sox were fortunate to get a start against Brian Matusz, once one of the Orioles' most heralded prospects. Matusz has now faced the Yankees and Red Sox in his last two outings and was destroyed both times. It's really kind of sad. You watch his body language and the poor kid simply wants to crawl under a rock. There is either something physically wrong with the kid or mentally, he's lost it. Whatever it is, his Fangraphs velocity chart speaks volumes: 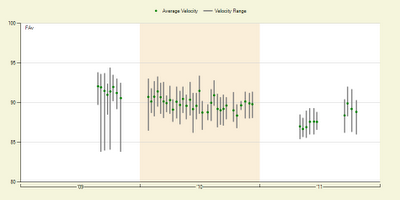 But Matusz wasn't alone in this stink-a-thon. By the time the Red Sox were done with their seven-run seventh inning, the final tally against the Orioles' pitching in this game was eighteen runs on twenty hits and eight walks. Yeah, ugly. Despite everything he could do to allow the Orioles to win, Lackey's team doubled the amount of runs the Orioles scored.
To put these two games in perspective, the two teams combined for 38 runs on 53 hits with 16 walks. There were five combined errors and six double-plays. And the umps blew a call. Pitchers in these two games threw a combined 657 pitches. Holy Toledo!
All in all, the Red Sox got one in the win column they desperately needed. They can play their games against the Orioles and hope the Yankees swat down the pesky Bay Rays this week. This is still the beantowner's wild card to lose. They just have to win a few this week to get there.
Posted by William J. Tasker at 3:45 AM