There is a lot of controversy surrounding the article in the New Yorker called Madoff's Curveball. Besides all the Twitter chatter and the talk on the sports television shows, Buster Olney has the latest riff on the fallout from the article. Olney's slant on things is that Fred Wilpon undercut his general manager, Sandy Alderson. Olney also links to several articles criticizing Wilpon, including a couple that call for Wilpon to sell the team. The criticism seems a bit viscous from this side of the table.

Let's push aside for a minute the Madoff angle and talk about the things that Wilpon was quoted as saying in the article. Wilpon is quoted as saying that Jose Reyes will want Carl Crawford money and he won't get it. He goes on to say that David Wright is not a superstar and that Carlos Beltran is only worth 60 to 70 percent of what he's getting paid. The short answer is that yes, those players were thrown under the bus a bit. But Olney and others take that as an indication that Wilpon undercut his GM by announcing to the world that the Mets would try to get rid of those three players. Is that what Wilpon did? Maybe. But wasn't that a foregone conclusion anyway? Hasn't this Fan already read a dozen articles about what team Reyes will be traded to before the article ever came out?

And since when is it a crucifying event for an owner to criticize his employees? George Steinbrenner did it his entire career. Those three players have been paid a lot of Wilpon's money. As an owner of the Mets, what does he have to show for those paychecks? Of course Reyes is going to want big money. Which player doesn't? Crawford was paid an obscene amount of money. Wouldn't every free agent ask for similar money with similar skills? Their career paths aren't that dissimilar until last year. See the Wargraph (from Fangraphs.com) below. 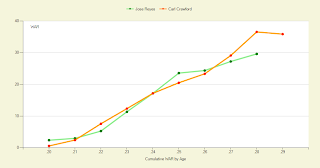 And what of David Wright? Is Wilpon's assessment accurate. Is David Wright a superstar? Is Carl Crawford? That's debatable. Again, Wright and Crawford have similar War Graphs. Wright is just a tick higher for career WAR than Crawford. But Wright's defense is awful. This Fan thinks both players are just a bit under superstar players. They are very, very good players but not elite.
Wilpon is wrong about Beltran. Well, not totally. Beltran isn't worth the money he's getting paid currently. But he will earn enough WAR this year to cover his entire contract with the Mets. In other words, if you add up Beltran's WAR in his time with the Mets and translate that to dollar values, the Mets have gotten their money's worth.
So Wilpon's assessments, while critical of his players, are not totally without merit. And again, as the one footing the bill, isn't he allowed to say what he wants about his players? How come Steinbrenner got a pass but Wilpon doesn't? Steinbrenner was viewed as trying to motivate his players. Wilpon is viewed as trying to tear them down.
As for the Madoff mess, the courts will decide the culpability of Fred Wilpon toward his buddy, Bernie Madoff. The article mentions several times that Madoff is on record that Wilpon didn't know about the Ponzi scheme. And if Madoff knew, would he have lost $500 million when Madoff crashed and burned? Again, the courts will decide. The view here is that Wilpon was a victim and lacked due diligence in what Madoff was doing.
This Fan finds the criticism of Fred Wilpon to be unfair. And this is coming from a long-time non-Fan of the Mets. Wilpon has been good for the team, has increased the team's value and if guilty of anything, it was in hiring bad management before Alderson came on board. The bad press Wilpon is getting seems mean-spirited.
Posted by William J. Tasker at 12:26 PM