No matter how you may want to view Alex Rodriguez and his career, the one thing you have to admit is that he's been a prodigious slugger. One of only a handful of players to hit more than 600 homers, he also has quite a batting resume. His lifetime slash line is: .302/.386/.568. He's driven in 1884 runs and before he is done could become one of the few players ever to drive in over 2000 runs. But there is a curious thing about Alex Rodriguez and his statistics. He's only compiled 88 intentional walks in his career. Why would that be?
The intentional walk is a somewhat modern invention. Babe Ruth and Lou Gehrig didn't have intentional walks. Well, that's not entirely true. There have always been intentional walks. They tried without success to ban them in 1920 for example. The correct way to say this is that they only started recording intentional walks in 1955. So guys like Ruth and Gehrig were intentionally walked, but there is no way of knowing how many of their recorded walks were intentional. The 1955 date of beginning to record intentional walks is troublesome as well because that was mid-career for guys like Willie Mays, Hank Aaron, Mickey Mantle and Ernie Banks.
But even with that said, Mays, Aaron, Mantle and Banks were all afforded the "four-finger salute" many more times than Alex Rodriguez. Again, why is that? To prove the point, take a look at this little spreadsheet this writer put together: 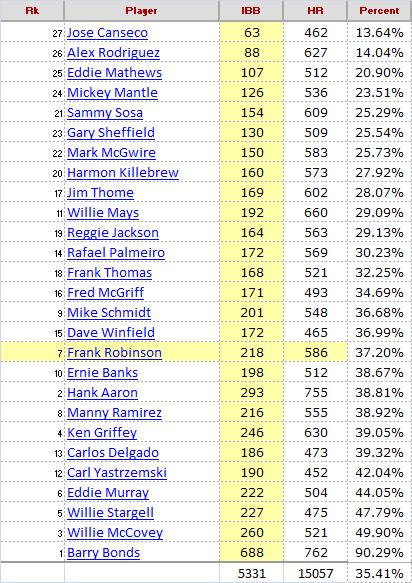 As you can see, on this list, only Jose Canseco hit more than 450 homers and had less intentional walks per homer than Alex Rodriguez. You could understand that to a degree because Canseco was an all or nothing kind of hitter. But Alex Rodriguez has been a much more balanced, all around hitter than Canseco ever was. So what gives?
In A-Rod's first six years, he batted in front of Ken Griffey, Jr. for the Seattle Mariners That would explain some of those early years. Griffey, as you can see on the list above compiled far more IBBs than A-Rod because there wasn't a hitter to protect Griffey like Griffey protected A-Rod. But even so, In 1996, A-Rod hit 91 extra base hits and batted .358. You would think you might want to take your chances with Griffey, no? By 1998, A-Rod was clearly the better hitter. But from his rookie season in 1994 to 1999 (the Griffey years), A-Rod was intentionally walked only four times.
In 2000, Griffey was gone and Alex Rodriguez had another great season but was nearly matched in hitting performance by Edgar Martinez. Still, A-Rod was the guy. His IBBs increased to five. But Edgar Martinez was intentionally walked eight times and even Jon Olerud was intentionally walked eleven times.
In 2001, Alex Rodriguez was with the Texas Rangers and hit 52 homers. His 1.021 OPS was clearly the best on what was one of the best offenses in the game of baseball. He was intentionally walked six times. Rafael Palmeiro was walked intentionally on eight different occasions. Palmeiro had a great season, but was he more fearsome than A-Rod? In 2002, A-Rod hit 57 (!) homers and his IBBs bumped up to twelve--the highest of his career. But he was still outpaced by Palmeiro who was walked intentionally sixteen times.
It wasn't until 2003, his tenth season in the big leagues, that Alex Rodriguez led his team in intentional walks with ten. Palmeiro had nine and Mark Teixeira had six.
2004 began A-Rod's Yankee years and in his first year, he was intentionally walked six times. Gary Sheffield was given seven free passes that season. From 2005 to 2008, A-Rod led the Yankees in intentional walks with 36 total or an average of nine a season. Eleven was his high water mark with the Yankees in 2007 when he hit 54 homers. Since 2009, his totals went from seven in 2009 (Teixeira had more) to one in each of the past two seasons. It's been common in the past couple of years for Teixeira to be walked to get to A-Rod. Plus, with the emergence of Robinson Cano, nobody wants to face him with runners on base.
Alex Rodriguez is in his eighteenth season and again, has been one of the most prolific run producers in major league history. And yet, despite that fact, he has averaged only seven intentional passes per 162 at bats. For a slugger his caliber, nobody has been intentionally walked less. It's puzzling. It might even be confounding. And the lack of free passes might be one of the reasons he shares the major league record for career grand slams. Has it been a lack of respect? Has it been the deepness of the line ups he's been a part of? It can't be because of the myth that he isn't a clutch player. A-Rod has a .943 career OPS with runners in scoring position and a .966 career OPS in high leverage situations.
It's certainly puzzling. But there it is.

Great article! I bet a lot of the lower guys (mainly Canseco and A-Rod) have always had a great hitter behind them. Canseco had McGwire for a long time and A-Rod had Griffey, Palmiero, and whomever the Yanks gave big money to. Bonds, McCovey, Stargell didn't really have anyone like that behind them.

Possibly. But even a guy like Clemente who had Stargell behind him had 167 intentional passes.