Michael Young - the Next Paul Molitor?

One of the fun pastimes of watching Major League Baseball for a long time is making comparisons of players of this current generation to players that played in the past. While we all know that such comparisons are difficult because the game changes subtly over the years, we still do it. Everyone is always looking for the next Mickey Mantle or the next Pedro Martinez. This writer has found one compelling comparison that actually may be relevant. Michael Young of the Texas Rangers is Paul Molitor. Sort of.

Young received plenty of criticism (especially in this space) for his reaction to the Rangers moving him to the Designated Hitter with the acquisition of Adrian Beltre. Young makes a ton of money and the criticism was fair as far as this writer is concerned. To his credit, Young has quieted down and is having a very good year at the plate. He's batting .335 and closing in on 200 hits and 100 RBIs. His .855 OPS is solid. He's been the steady provider in a Rangers' season that has seen its share of injuries to top performers.

The careers of Young and Molitor are remarkably similar. Molitor's career slash line was: .306/.369/.448. Young's: .303/.349/.451. Molitor started two years younger than Young in the majors so when you compare their WARgraphs over at Fangraphs.com, Molitor had an edge on the the accumulated WAR by age. But Young's WAR was hampered by his fielding. Compare the two in this WARgraph: 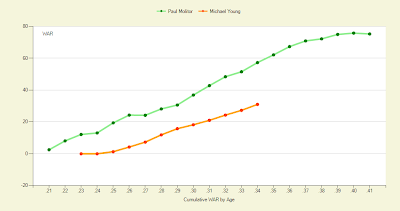 But now that Young is a DH, and if he continues to get considerable at bats in the coming years, his chart should continue to build like Molitor's.
Let's compare the two players at Young's current age of 34. At 34, Molitor had accumulated 2086 hits on his way to over 3300. Michael Young has 2041 hits. Molitor had 369 doubles. Young has 385. Molitor had 3,057 total bases. Michael Young has 3,037.
In all fairness, these stats have been somewhat cherry picked. Molitor was much more patient at the plate and had almost two hundred more walks at 34 than what Young has. Young has slightly more homers but almost two-hundred less runs scored at the same age as Molitor at 34. But Young has almost 200 more RBI. Molitor with an earlier start and a better OBP also had a much higher oWAR at 34 than Young.
But the overall point is valid (this writer thinks). Molitor went on to compile enough counting stats to buy his ticket to Cooperstown. If Michael Young can maintain his current pace for the next few years like Molitor did at a position that asks him only to hit, perhaps the same may happen for him.
Posted by William J. Tasker at 8:40 AM

Excellent analogy. Before this year, I though Young's HOF chances were dead, but he's rebounded quite nicely at 34. If he can keep producing, he certainly has a shot.

I think the graph argues strongly *against* your argument. By age 34, Molitor had already accumulated twice the value Young has. And Young gets all those points for playing shortstop for years (and gives some back for never playing it well). Young's a good player, but if Larry Walker is kept out of the Hall based primarily on the Coors effect, but Young gets in based on what he did in Arlington, something went wrong. Young's more Tim Wallach than Paul Molitor.

Good comments and points, Bryan. Thanks. Thanks, Charles.