Last night in a Twitter conversation with Mark L. Smith of The Platoon Advantage, the state of the Atlanta Braves' bullpen was discussed. Jonny Venters gave up a bunch of base runners and then Craig Kimbrel blew the save and gave up two runs after a long, long perfect stretch of spectacular appearances. Sure, it could be the law of averages catching up on them. Or it could be a bunch of "BABIP" hits. But there is a definite possibility that the Braves' bullpen is tired and with young pitchers, that's not what you want heading into the post season (if the Braves hang on to the wild card, that is).
The Braves currently rank third in all of baseball in reliever appearances behind only the Marlins and the Pirates. Kimbrel, in his rookie season, has pitched seventy-two times. Darn near all of those appearances were in high leverage situations. He is ninth in the majors among relievers in WPA. Number one on that list is Jonny Venters, himself only in his second season. Being that high on the WPA list means that Venters has been in even more high leverage situations than Kimbrel. Venters has made seventy-seven appearances good for 80.2 innings of work. Don't get this writer wrong, they have both been brilliant this season. But when you have such a good thing going in a bullpen, the danger is over using it.
Eric O'Flaherty has made seventy appearances with slightly less innings pitched than appearances. But still, each appearance means warming up and throwing a lot of baseballs. Scott Linebrink has "only" fifty-eight appearances, but consider that he had forty-one appearances in the first half alone and he is a pitcher ripe for breaking down. George Sherrill has fifty-one appearances.
To see if we can show any evidence of wear and tear on this fabulous bunch of relievers, this writer consulted Fangraphs' wonderful Velocity Charts on four of the key relievers. This writer believes you can see a drop in velocity over the last few appearances for each of the four. First up is Kimbrel's: 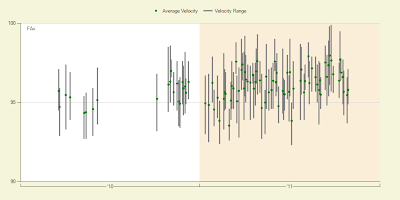 Next Venters which shows a significant drop: 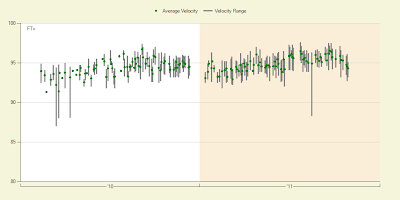 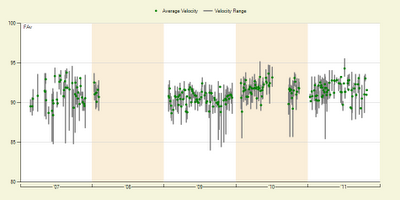 And finally Linebrink whose velocity has really gone down of late: 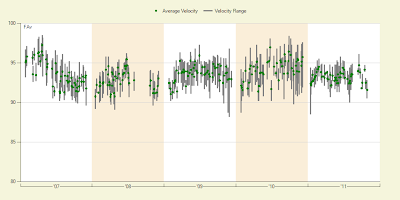 From the looks of things, these guys need a rest. As Mark mentioned in his final tweet on the subject last night, the Braves better clinch the wild card soon and then rest these guys. Venters in particular seems to be the one in most need of some shutdown time. The last thing you want is a bunch of dead arms going into the playoffs. Beachy, Minor, Hudson and the rest of the rotation could help by going deeper into games.
Posted by William J. Tasker at 11:55 AM